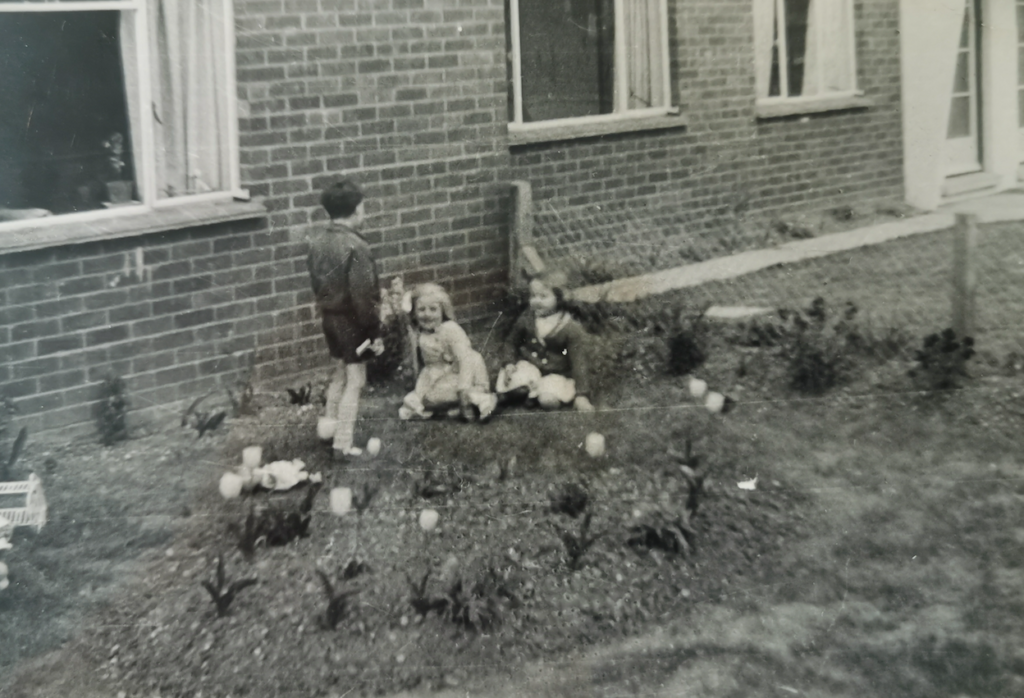 The Katon children in their garden

Edward Katon moved here with his family circa 1958. They had previously lived at 18 Humphreys Road.

Edward Katon kept detailed records of many episodes in his life and Capturing Cambridge has reproduced some of these:

Arbury Estate, 63 Alex Wood Road. Our next move was to a ‘small’ 3 bedroomed house in Alex Wood Road. Like the one in Humphreys Road it had just been finished. The front garden was 1 foot higher than the path from the gate to the front door, so the earth was moved, in a handy wheelbarrow, to a point half way along the back garden to make a rockery. It took several days to shift it all, meanwhile other people were moving into the adjoining houses 94 in a block) and copying me by having a rockery. When I finished the front garden with flower borders all round and grass seed set in the middle I turned my attention to the back garden. Discovering a hole about 18 inches deep and several feet across I used all the earth from the unfinished rockery and just filled it in level with the rest of the garden. I had been annoyed at everyone copying my rockery so I just turned that part of the garden into a lawn. ‘Aren’t you going to have a rockery’ neighbours asked me. ‘No, they are too common’ was my reply, as I turned the rest of the garden into a vegetable plot.Later on vegetables were not growing well, a workmate gave me part of a strip of soil tester which showed that my garden had too much lime in it. There were two ways of curing this. The first was to spend lots of money on chemicals, which I could not afford. Or secondly let the garden grow wild for a year as nature took its course and just keep the weeds down. The back and front lawns were seeded with grass seed and flourished. Six weeks after sowing had their first cut with shears. The border flowers were fine. Lots of big ‘daisy weeds’ grew on the veg. garden. My two older daughters had a small piece of garden to do what they liked with and the third youngest daughter, about 4 years old wanted ‘her’ piece of garden. The only piece available was near the brick built shed and she was given that to keep her quiet. A bit later on that day she called me to see what she had done. Expecting to see flowers I was surprised to see a mound about 18 inches high beside a hole, where the earth had come from, and planted at the top of the mound was the biggest ‘daisy weed’ from the garden. She was so pleased with her work and it was so unusual that I could only compliment her and say what a clever girl she had been.She liked gardening after that and as you can guess, all the water ran from the top of the mound and the ‘daisy weed’ shrivelled in a couple of days.

Later on in the year on Bonfire Night lots of relatives came round and following a suggestion from one of them we each bought 2 or 3 really big fireworks each and had a good show, rather than dozens of small ones.One person kept falling into the hole by the mound, then telling me about it. As he must have known where it was after the first fall I could not understand why he kept stepping into it. I dare not open the shed door to get a spade to fill the hole as our cat was shut inside it. Our house was open and I did not want to lose the cat who was frightened by the noise and would have run away. The next day the mound was used to fill the hole in and that was the last of the hole.

You were not supposed to plant trees near the house in case the roots undermined it. Undeterred he planted a tree at each end of his rockery. Their trunks were about 2 inches thick and were over 2 metres tall. I was not too pleased to see those trees but thought that if they grew into large trees the roots not being into the ground, with only 2 or 3 foot roots to support them, they would soon topple down in some of the strong winds we had, so I waited to see the fun. Meanwhile the leaves falling in winter would be a nuisance. My mother spoilt everything when she came to visit us. Seeing the trees she burst out laughing, ‘ They are horse chestnuts’ she shouted. ‘You can tell by the leaves.’ He must have heard her because a few minutes later he was standing on the rockery wrestling with trees pulling them up. His next venture was to grow a fir tree near his front door. It grew to root height and one day his ten year old son climbed up it and gained entry to a bedroom. We came back from shopping a few days later. The tree had gone and a 2 foot stump was all that was left.

Our sitting room was at the back of the house and now and again there was a smell of gas. Each time it was traced to the safety gas point near the fire. One morning I went in as soon as I got dressed and the room was full of gas. Immediately opening the windows, shut off the gas supply and sent for the gas company engineers who quickly came. They surmised it was where a take off point was where the main gas pipe passed into the kitchen gas was diverted to the gas point at the sitting room fire. Their foreman came and fitted a meter to the gas ring. Water rose up a glass tube when the gas was turned on at the meter. Then the gas was turned off. The water level cropped sharply indicating a large leak. Digging up the concrete floor the ‘take off’ join to the main gas pipe had never been soldered. That was soon pout right. Our next problem came a few years later.

The wooden backdoor had rotted and so had the door frame. A council carpenter arranged to fit a new back door and timber to replace the frame where it had rotted. It was a bitterly cold windy day so he hung a tarpaulin in place of the door weighted down with lead weights at the bottom. Having finished the framework he attached the door. It was 4 inches too wide and could not be shut. Removing the door he found he had not brought a big saw needed to cut off the excess wood and decided that as it nearing his finishing time he would leave the tarpaulin up all night and finish the job in the morning. My wife had other ideas and wouldn’t let him go until he fitted the door. So he had to use his wood plane to remove 4 inches of wood, while my wife put the shaving in the boiler in the kitchen. It was roaring away and set the chimney on fire. I could smell the burning soot down the road as I cycled home and was amazed to find it was my home. They had finished by the time I got home. The door was refitted and the handle and lock in place. We had a chimney sweep in a few days later.

After 6 months the serviceman who had gone to Papworth (The TB hospital) returned and although he insisted that it was a food idea to have a shop based engineer I was made redundant. No redundancy pay in those days. Looking around for another job, I joined a small firm making vacuum welding equipment. Welding in a vacuum is clean welding. No flux or smoke. They did not make a standard machine. Every one was different. design started with what the customer wanted. This decided the size of the vacuum chamber which then decided the air extractor pumps sites, seat for operators and control gear, my job was to make the electronic control gear and also look after the electronic parts stores. Ordering, keeping stock and so on. the vacuum chamber for welding transistros was one cubic foot in size with a rotating plate holding 60 transistors each spun round 3 times. Another vacuum chamber was so big you could have put a Ford Cortina car in it. It was not the biggest machine, one for the Italian nuclear industry had in large vacuum welding machine at each end of a ‘tunnel’ only just dropped through the removed roof of a juggernaut lorry.

Other equipment made were ‘ovens’ which heated metal objects to 1600f and occasionally ones to heat and temper metal to 1800f. Another large machine that went to Germany made aluminium labels. A lot of static electricity on the aluminium sheeting made things difficult. It was taken to Frankfurt in Germany and installed there. They had a lot of trouble with it which took a few weeks to sort out. I refused to go to Frankfurt. There were 9 others in the department I was in and we had a disabled daughter to look after.