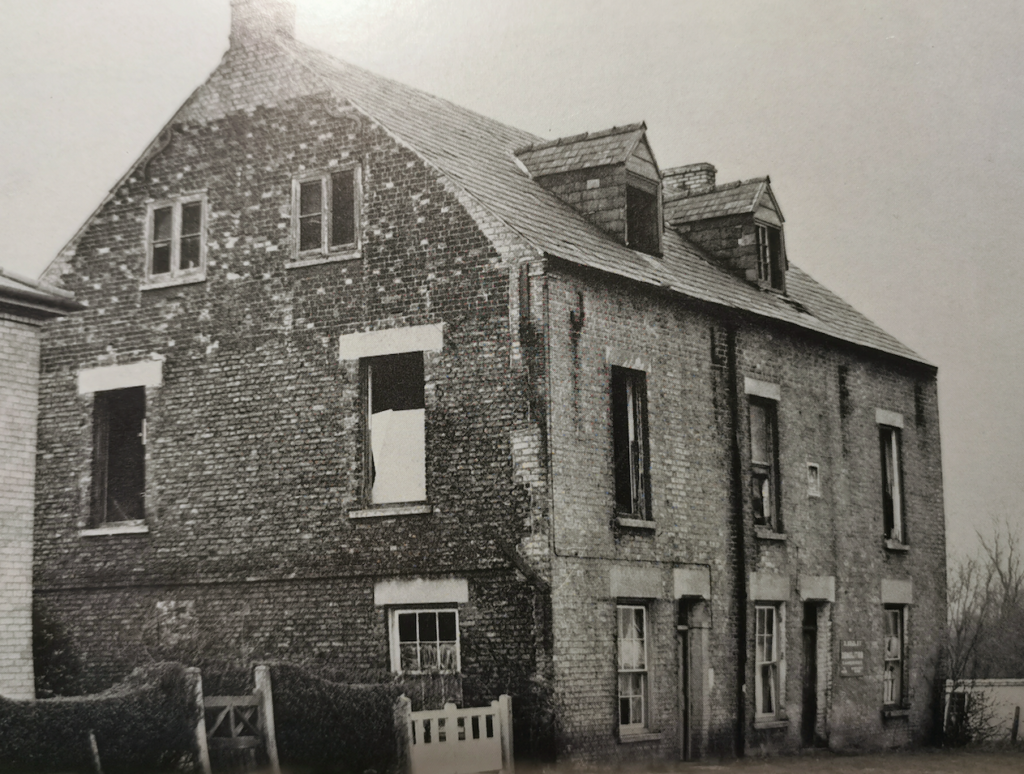 Royal Commission Survey of Cambridge 1959: Oyster House, on the SW side of Garlic Row, some 233 yards from Newmarket Road, of two storeys with cellars and attics, has walls of red brick, except where rebuilt in Gault brick, and slate covered roofs. It is a building of the early 18th century and stands near the middle of the site of Stourbridge Fair. …. It is associated with the feast succeeding the ceremony of proclaiming Stourbridge Fair by the University Registrary described by Henry Gunning (Reminiscences of Cambridge (1885)) and thereafter with the Court House during the Fair.

Garlic Row was also described in conjunction with Stourbridge Fair by Edward Ward, ‘A Step to Stur-Bitch Fair, with Remarks upon the University of Cambridge‘, The London Spy, 1700:

From these Booths I went strait up a Hill, and came into a very handsome Street call’d Garlick Row, where the slit-deal Tenements were occupied by Sempstresses, perfumers, Milleners, Toy-men, and Cabinetmakers; and is chiefly frequented by Powder’d Beaus, Bushy-Wig’d Blockheads, Country Belfa’s, and Beautiful Bury ladies … This Place terminates in a Place call’d originally Cooks Row, but now more properly Cuckolds Row ….

Garlic Row where the luxury booths stood. (In Elizabethan times, the grocers and mercers were required to sell in Cheapside, that is, Newmarket Road. By 1700, they had shifted.) Here ladies and gentlemen could promenade up and down to see and be seen. The awnings along the front of these booths gave shelter from sun and rain, as needed. Entering the booths was exactly like going into a shop in a town, with a counter, stacked shelves and obsequious salesmen.

The grocers’ booths were among them. The grocers came to the Fair in the Middle Ages with spices, the prized and expensive produce of the East Indies. The very long journey made by cloves, cinnamon, ginger, nutmeg and mace allowed plenty of opportunities for deliberate or accidental contamination with less valuable substances.

…from the 1660s, grocers’ shops should become the outlets for those wonderful new commodities: tea, coffee and chocolate. Several Cambridge grocers were at one time or other keepers of the Fair. They were in competition with Londoners who came offering all, or part of, the traditional grocer’s stock…

there were mercers and drapers on Garlic Row to supply lengths in silks, wool or linen for individuals and families. … there were shoemakers, hosiers, hatters and haberdashers, with milliners…

For seven years from 1790, a London saddler, J Kelly, traded from the Oyster House (or Tiled Booth as he called it). He boasted the patronage of the Prince of Wales and the Duke of York, and his own new designs in horse harness

1874: listed in Spalding’s Directory with no occupier or neighbours

1922: 18 houses built beside it running up to newmarket Road

There were at least nine small grocery and sweet shops between Garlic Row and east Road corner. I went to Abbey Church, River Lane Sunday School and Christ Church. We had a Sunday school treat to the corner of Ditton Lane, near where Pye’s factory used to be. It was all lovely cornfields then and we had a picnic. It was great fun.

My foster mother’s aunt lived in the Oyster House, Garlic Row. I used to have to go there, as a child, and it seemed quite frightening. Mrs Brown lived there and local children thought she was a witch. She wore a sack tied round her waist and old-fashioned clothes. The house was in a bad state of repair and for children it seemed like a very ‘spooky’ place. In the parlour was a large glass dome under which were stuffed birds and animals. People said that there was a ballroom upstairs, which was used during Stourbridge Fair, when the house played an important role.

1951: A young academic lived in the house with his family with undergraduates visiting for supervision