The plot of 8 Portugal Place is (2a), a plot of ground by the churchyard. 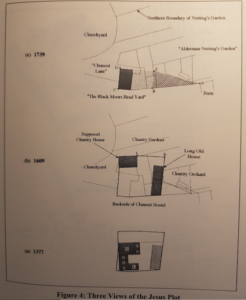 Before 1267: there is an undated charter which records a gift of several rents to the nuns of St. Radegund by William Corde, including 3s ‘from land in the which ]William de Furcis] holds in the parish of St Clement which lies between land of Geoffrey Gybon and land of Hareflet and extends from the road as far as he king’s ditch. The Hareflet area is labelled (5).

1373: two 14th cent. leases granted by the nuns of St Radegund refer to property in this area. The first was to Richard Milde capellanus, John de Kelesseye, cooper and his wife Avisia. The second was granted in 1377 to John and Avisia only. Richard Milde became vicar of St Clement’s in 1353 but by 1373 Adam de Walsoken had taken over the role. In fact it seems likely that Richard was no longer vicar in 1365.

1401: Adam de Walsoken complained that there was no house for the vicar to live in. In 1402 the nuns granted Adam and successor vicars the old house on the site as a parsonage.

1473 – 1531: benefice held by John Damelot and then Reginald Aspes. They were fellows of King’s Hall and St John’s respectively and would have lived in college.

1608: lessee Hugh Jones the younger, tailor; he built two adjoining houses on a different part of the plot, and then sold out to John Trott.

1739: Thomas Nutting, merchant. See 1739 map on diagram. His plot is indicated by the polygon ABCDE.

1785: Thomas Willett. The two old houses were got rid of and a single house was built which survives today. Thomas Willett died in 1808 aged 76.

1808: house and garden taken over by Sussums who had a greengrocery business on Bridge Street.

1830: on her death transferred to William Sussum and he sold it to a cook at St John’s.

1959 Royal Commission on Historical Monuments Survey of Cambridge: formerly the vicarage of St Clements, has rendered timber framed walls and tiled roofs. It was built in the 17th cent., improved in the 18th, and has since been modernised.