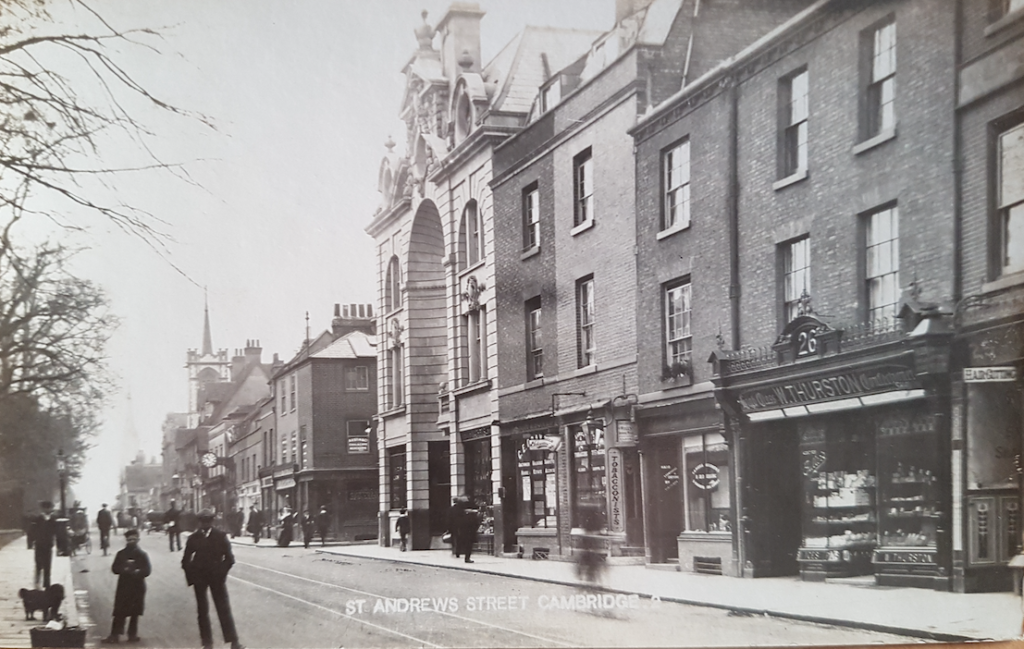 According to Outside the Barnwell Gate (1915), this was the site of the celebrated medieval inn, the Bird Bolt. Indeed, the Downing Street had previously been known as Bird-Bolt Lane. It was then in the possession of St John’s Hospital and it passed into the hands of the college of the same name. 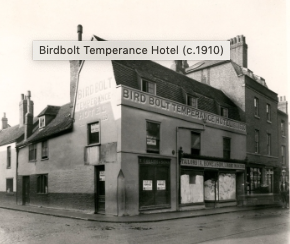 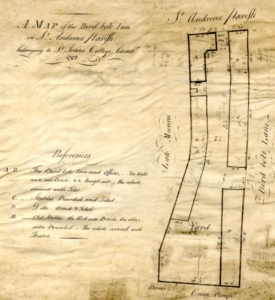 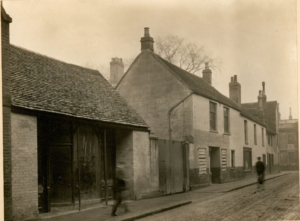 For more information se the page on the St John’s College website:

The building was demolished circa 1900 and the business moved to 41 Regent Street.

1577: lease granted to Jo Redayne of the Burbolt. Mr Redman was a well-known Esquire-Bedell (1563-c.1579) who had many financial and commercial dealings.

1609: lease to William Scarlett, stationer, of the Burbolte – he was a well-known Cambridge stationer.

1631: licence granted by the Vice-Chancellor of ‘The Hanging Burbolt, in St Andrew’s Parish, an Inn.’ This was to Henry Butts, the Master of Corpus who, having acted so heroically during the long plague in Cambridge, committed suicide on easter Day 1632.

The Wikipedia entry on Corpus Christi College records: The next notable Master was Henry Butts, who was also Vice Chancellor of the University. When the plague returned to the city and the rest of the University had fled, Butts stayed at his post and tried to limit the pestilence while staying alone in the college. He was unrewarded for his bravery and this experience seems to have had a terrible effect on him. In 1632, when Butts failed to turn up to deliver the University Sermon on Easter Day, he was found to have hanged himself.

The next notable Master was Henry Butts, winner of a hung election in 1626 (after his opponent had thought he had elected himself by his own casting vote). He is remembered as the author of Diets Drie Dinner, a spoof herbal and parody of herbalists’ claptrap. He was an overworked man in Cambridge’s nastiest period, especially when as Vice-Chancellor he had the job of organizing a visit by the new and touchy King Charles I.

Dr Butts came to a premature and tragic end. In 1630, when he was still Vice-Chancellor, plague struck Cambridge yet again. Almost everyone who could ran away (as people did when there was plague), but Butts stayed resolutely at his post and worked with the town authorities to try to limit the pestilence and to organize supplies and relief for the vast numbers of unemployed. In a sad letter to Lord Coventry he describes how he himself was ‘alone, a destitute and forsaken man; not a Scholler with me in the college, not a Scholler seen by me without. God all-sufficient (I trust) is with me’. This dangerous and heroic task went unrewarded and unthanked. Butts was subjected next year to mean intrigue and criticism (Cambridge at its worst) over the postponed royal visit. His mind gave way; he thought God had deserted him; and on Easter Day 1632, failing to turn up for the University Sermon which he was to preach, he was found hanged in his garters from the lintel of a door in the Master’s Lodge.

In 1901 Joseph Winship Snr is an Auctioneer, with wife and Joseph Jnr at 2 Regent Street. The address 29 and 30 St Andrews Street is shown on the 1901 census page so was probably vacant