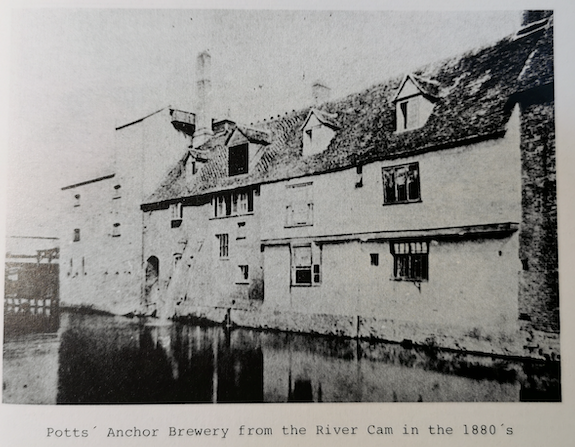 Pott's Anchor Brewery in the 1880s

History of the Anchor Brewery

Notes from An Intimate History of the Parish of St Clement’s Parish, T E Faber, 2006

In 1359, a William le Gode granted to Roger de Herlaston and three others ‘ a dovecot with a garden and other tofts adjoining the same garden and a grange on the common river bank in Cambridge‘. This is very likely to refer to the areas later known as Sedge Yard Estate and Dove House Close. He seems to have purchased most if not all of the Anchor brewery site separately by various transactions in the 1360s.

In 1381 the house was attacked by a town mob and the dovehouse burnt. Roger de Herlaston was mayor at times and it is likely his family used the house until around 1381. Later the family’s ties with Cambridge weakened and the house was used as a hostel for jurists known as Harleston Place or Harleston Inn. There is little information about the hostel, only three reference from the years 1466-8. It seems to have been a much smaller affair than Clement hostel. It was dedicated to St Edmund and probably declined during the 16th century and probably closed c. 1570.

The freehold was held by Oliver Flint in 1572. He seems not to have done much with the buildings immediately. This was left to his successors and by 1688 the site was in much the same state as it was two hundred years later.

1788: William Tassell, merchant of 29 Bridge Street, leaves estate to his daughter Judith, married to paper maker from sawston, Charles Martindale. In the same year estate is sold on to Thomas Clarke, merchant, for £680. Clarke was probably the sitting tenant of much of the property.

1796: Clarke sold out to John Haggerston. The property consisted of a malting or merchant’s yard, the Ship Inn, a warehouse, a coal yard, stocks of timber, coal etc, fixtures and fittings. It seems that the Ship Inn had moved and was now in the location of the Swan. the maltings became known as ‘Mr Haggerston’s maltings’ in a plan of Sedge Yard Estate dated 1800.

1849: William Potts gained title to the Anchor Brewery and managed it in the second half of the 19th century; it was put up for sale by George, Henry and Frank Potts in 1896.

c 1851: The new Ship Inn is closed down. Whole of the house lived in by the Potts family and the rest of the premises devoted to production of malt, beer and barrels. 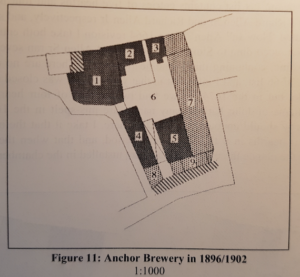 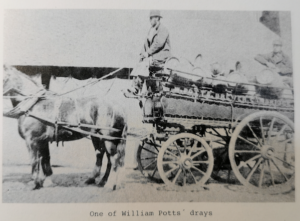 One of William Pott’s drays

For more information on the early history of the Brewery Garden site (5) and early owners of the brewery see T E Faber p87ff. 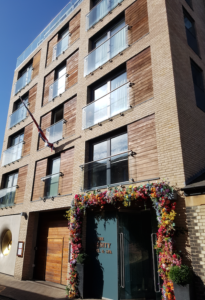