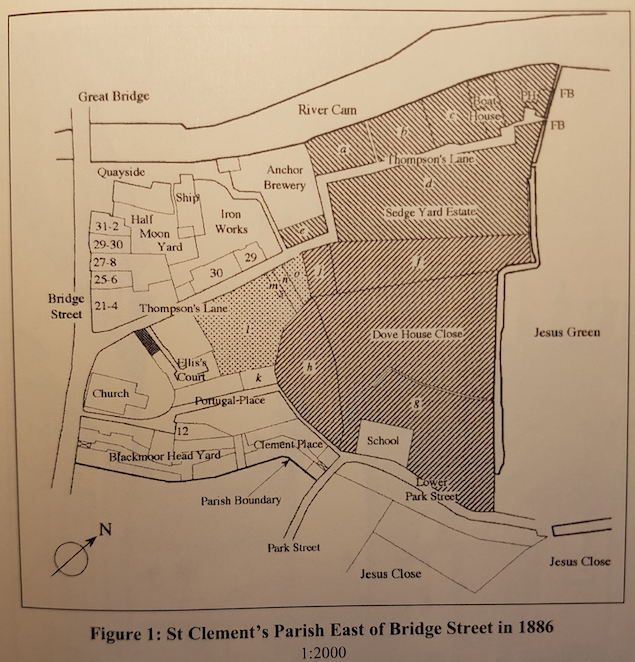 History of the Sedge Yard Estate

The road through the estate which became know as Thompson’s Lane – though it was also known as Sedge Yard Lane in 1859 – existed in embryonic form in 1688. The number of buildings to the south of the road increased up until 1886 by which time there was a house known as ‘The Paddock’ which seems to have been a cowyard or garden in 1859, and also a newish ‘Tobacco factory’ first noted in 1867.

On the north side of Thompson’s Lane the map shows the following sites:

a: an 18th century kiln, also a coal yard. By 1887 a narrow passage between (a) and (b) led to ‘Life Buoy at the Fish Runks‘. By 1891 ‘Whibley’s Sweet Factory’ occupied  half the site, and by 1893, a ‘nurses hostel‘ occupied the other. The factory and the hostel were let by St John’s to Magdalene College at this time.

b: sedge yard; by 1859 part of this site was in use as a stone yard; a firm of ‘coal, turf and sedge merchants’ had offices next to the boat yard in 1874. By 1887 this office was replaced by a stable. By 1893 a generating station for the Electric Light Company occupied (b) and (c). These buildings were later replaced by the flats known as Beaumont Place.