Coleridge Road and the new estates

At the start of the twentieth century, the southern boundary of Romsey Town was the disused Newmarket and Bury Railway, which had closed in 1896 – although a section of the track still existed from the station as far as Coleridge Road, according to the 1927 6-inch Ordnance Survey map (https://maps.nls.uk/view/101572039). The route of this short-lived branch line can still be traced on modern maps by following the line from Argyle Street across to Marmora Road and Burnside.

The land from here down to Cherry Hinton Road, and between the mainline railway to the west and the borough boundary to the east (where Perne Road is today), was mostly given over to allotments, gardens and suburban farmland. On 24 February 1917 the Cambridge Daily News reported on the pressing need of allotments for Romsey Town residents. Jesus College, who owned the land, made arrangements with Station Farm (near the old Cattle Market) to release five acres adjacent to Malta Road for allotments – ‘applications should be made to either Serjeant Carpenter, 32 Argyle Street or Messrs. J. Carter, Jonas and Sons, Land Agents, St Mary’s Street, Cambridge’. The newspaper reported again in April 1920 that several councillors were still calling for more allotments.

This land had originally been acquired by Jesus College, probably during the enclosures of the early nineteenth century, or earlier. At some point it must have transferred to the Borough of Cambridge – this was possibly when the municipal borough boundary was extended in 1910: there are several newspaper reports of colleges selling off plots of land around this time. Like many other cities during the inter-war period, Cambridge was expanding fast and there was an urgent need for new housing. A new development, the ‘Coleridge Road Estate’ as it was named at the time, was planned. Coleridge Road itself was laid out as an extension of what was originally called Romsey Avenue (where Romsey County Junior School had been built in 1905), crossing the route of the disused railway and cutting a path through the allotments towards Cherry Hinton Road. It first appears on the 1927 map as a dotted line with a few semi-detached houses, surrounded by empty space.

Both reports from the Cambridge Daily News, 2 March 1939

By 1938, the new Coleridge Road Estate was advertised as ‘very convenient for shops and schools’, with houses selling for a few hundred pounds. Coleridge Road was complete and the roads to the east of it (Hobart Road, Suez Road, Radegund Road), as well as Greville Road to the west, had all been built. However, the plots north and south of the Recreation Ground, where Fanshawe, Davy, Corrie and Brackyn Roads now are, were left as allotments and gardens and marked as ‘building land’ in the street directories, indicating the planners’ intentions.

After the war, housing development resumed, this time with social housing very much in mind. The 1950 Holford Wright report on Cambridge planning proposals announced that the Borough was to build a ‘housing estate between Rustat Road and Coleridge Road’. Noting the impending rise in population, in the same report the intention to construct a footbridge from here to the railway station was also indicated – however this proved a controversial issue and would not be built for another 30 years.

Davy Road and Fanshawe Road first appear on a map of 1951, but are unnamed and with no buildings shown. This area west of Coleridge Road must have seemed as one big building site for a couple of years, but by 1954 most of the roads and houses were complete. As with the already existing Radegund Road and Rustat Road, the new roads were named after prominent historical figures connected to Jesus College – Davy, Fanshawe, Corrie. On Davy Road, 42 two-bedroom flats were built, arranged in three blocks, each of three storeys, around a central green. Similar blocks were built in Fanshawe Road. 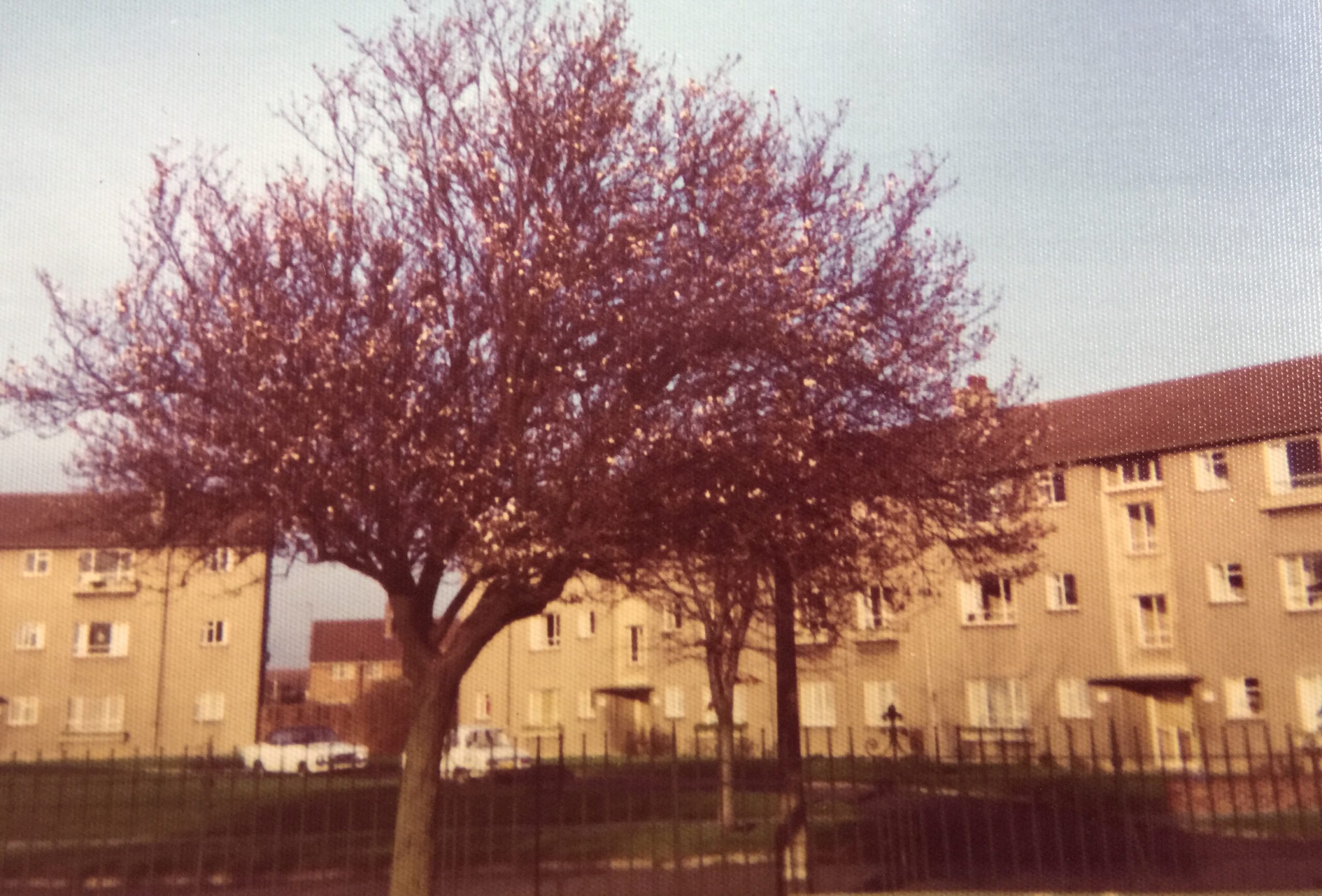