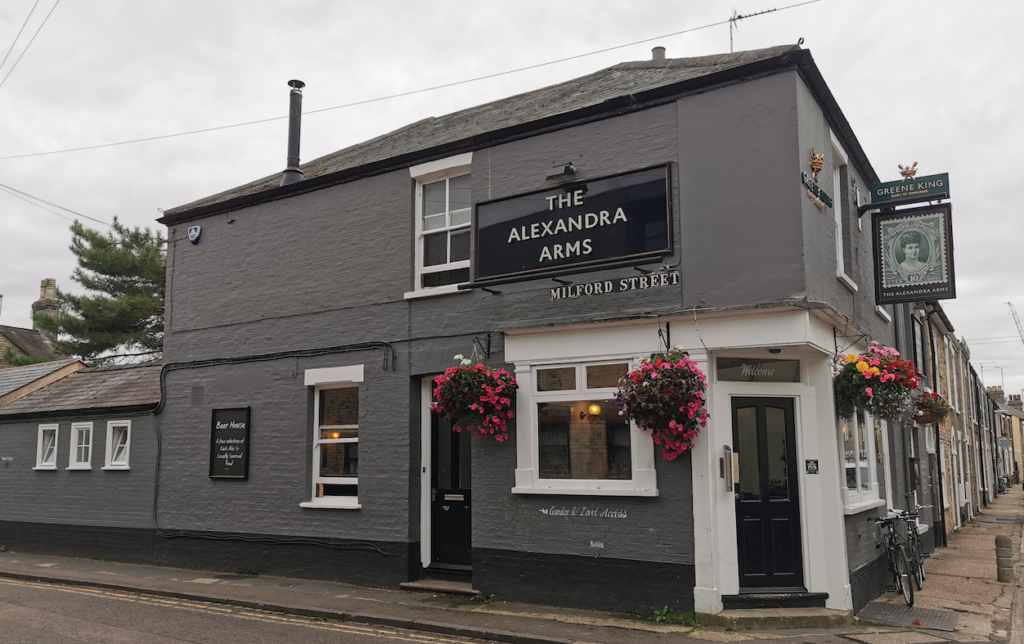 CIP 6.1.1883: Josiah Clark, licensed victualler of the Alexandra Arms, Gwydir Street, was charged with keeping his house open at unlawful hours at half past eleven o’clock on Sunday night last. The evidence of PC George Simmons was given to prove the case. Mr J E L Whitehead appeared for defendant. The defendant was convicted and fine 20s and costs.

THE FAILURE OF CAMBRIDGE BUILDER. This was the day appointed for the public examination of Thomas Twinn, publican, carpenter, and builder, of 22, Gwydir-street, Cambridge. A summary of the debtors statement trail shows liabilities amounting to £224 0s. 11d., assets of £39 15s. 61., leaving a deficiency of £184 5s. 5d.—  The Official Receiver made the following observations concerning the bankruptcy :

Receiving order and a judication ware respectively made on the 8th March instant on the debtor’s own application. He is described as a builder and publican, having commenced the former business about two years ago, and the latter in November, 1888. In February last the debtor states that he gave a bill of sale for £80, the amount of an antecedent debt, upon all his effects, to his brother, which security, owing to the want of a proper consideration, and partaking of a preferential character, is of no value, and the property was upon the adjudication realised for the benefit of the estate. The debtor attributes his insolvency. which he states he only became aware of at Christmas late, to bad trade, sickness of family, and loss by contracts, and these are lumped together as accounting for the deficiency. No traces occur in the books of accounts kept by the debtor of any such losses, the same only containing the names of his debtors.

In answer to the Official Receiver, the Bankrupt said he took on the business publican because the premises he entered had a good yard attached. He borrowed £80 from his brother to carry on the business. He gave his brother a bill of sale when he was hopelessly insolvent. He knew he was insolvent at Christmas, because he was unable to settle his accounts. He attributed part of his failure to losses on contracts. He had lost about £50 on contracts. There were no particulars in his books, and he only guessed at the sum. When he took the public house he was not aware that he was insolvent. There had been no property removed from his premises. Mr. Hudson purchased his goods and chattels at a valuation. Everything was included in that valuation. He had never made an arrangement with his creditors. —This examination was also adjourned in consequence of the first meeting of creditors having not been held. The principal creditors are: Mr. A. Twinn, farmer, of Tilbury, Essex £80; Messrs  Bates & Son, brickmakers, Cambridge. £17 11s. 3d.; Messrs. Hiscox &  Smith, timber merchants, Wisbech, £27 15s. 5d.; Messrs. Watts & Son, timber merchants. Cambridge, £20 3s 8d.; Messrs. Macintosh and Son, ironmongers, Cambridge, £8 16s 6d.: Messrs. Daintree & Smith, ironmonger, London, £ 13s : and Mr. P. L. Hudson, the Brewery. Pampisford, £18 10s.

Ruth Taylor, lodger, 38, living on her own means, b Suffolk

Caroline Taylor, lodger, 35, living on her own means, b Suffolk

1908: 10.7.1908: In A Public house Bar: Albert Hoye, labourer, of 3, Hanley-terrace, Sturton-street, was charged with stealing 5s or 6s. from a till, the property of Mrs. Annie Elizabeth Leng, wife of the landlord of the “Alexandra Arms,” Gwydir-street, on July 1st. Mr. O. Papworth appeared for the defence.

Miss Annie Elizabeth Leng, daughter of the landlord, stated that on July 1st the prisoner went into the bar, and was served with a pint of beer. After drinking the beer he left the bar, and returned again, and asked for another pint of beer, with which he was served. Witnees left the bar and went into the kitchen ; whilst there she noticed the prisoner move from the chair he was sitting on to one nearer the fire place. She heard the bar door shut. After wards she examined the till, and found 5s. or 6s. missing. Prisoner was the only man that went into the bar during that time.

Mrs. Leng said prisoner came into the bar on July 3, and she recognised him the descrip tion her daughter gave the man who was in the bar when the monev was missed from the till on the previous Wednesday. She called out to her daughter, “Good-bye, Annie, I shall be gone about an hour.” But she did not go out. She watched defendant through a window on the stairs, and saw him pull the curtains over the window and shut the door. He then walked to the flap in the counter and lifted it up. Witness went in and said, “Now I know you stole my money on Wednesday.” He said, “I never did a thing like that. I went to get “Photo Bits ’ from the back of the ledge.” He then walked out of the house. Witness followed and gave him into custody.

P.c. Nelson stated that be was called to the publichouse on Friday, but when he got there the prisoner was gone. Mrs. Leng, however, pointed him out in the street, and witness arrested him. Prisoner denied taking the money, and said he was crying to get a paper and the sleeve of his coat caught the flap in the till. Prisoner tried to show him how it happened, but it “did not work that time.”

Marion, 36, assisting in the business, b Scotland

Isabella May, 9, b Scotland