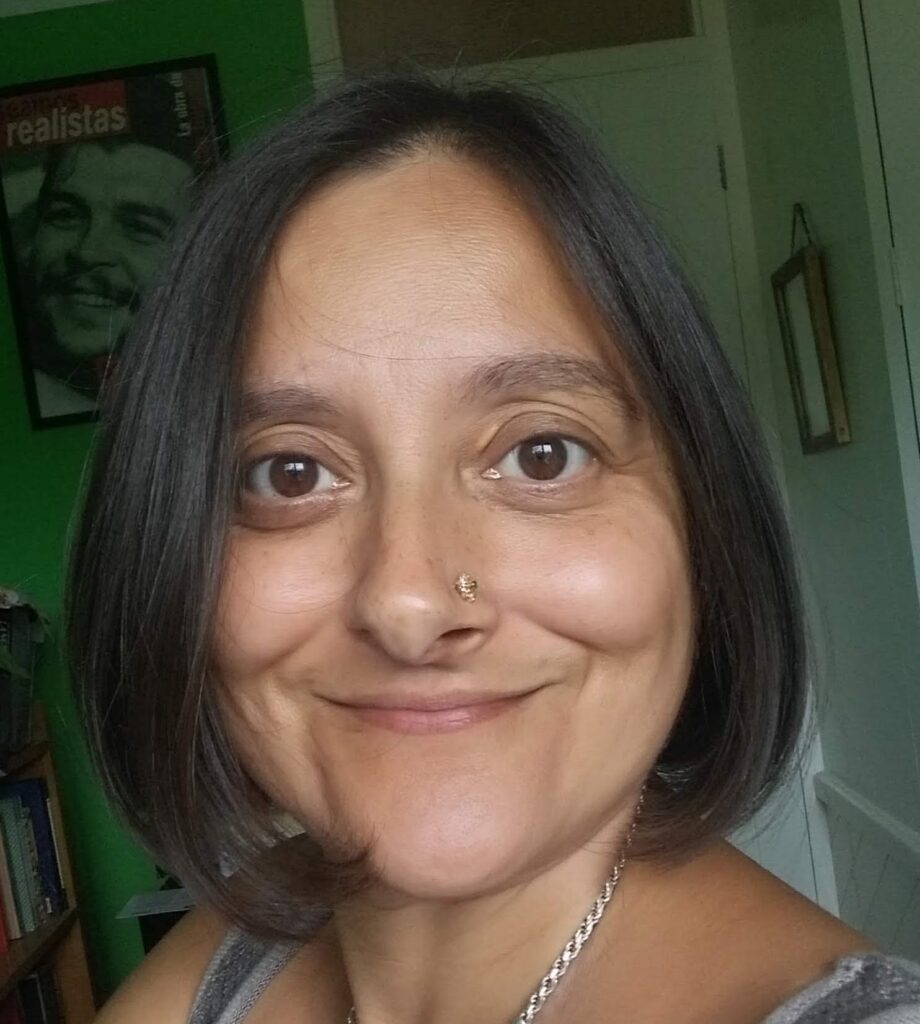 ‘Tick the box that describes your ethnic origin’

I could go with my birth in Pakistan,
but watching Zee TV, I fancy myself as Rekha
playing Umrao Jan, ‘Courtesan Poet of Lucknow’,
measuring out with belled feet those Urdu couplets
my father sings upstairs, to nobody,

that fix me with his memories of an Indian home
lost in the winning of a new nation,
the house he couldn’t recognise last year,
where foundations dislodged in the quake of Independence

and split my box of origins in two.

My pen loiters between the given borders,
loaded with footnotes we drag around
with explanations of ourselves –
finding no place to set them down
on the ‘statistical purposes only’ shelf. 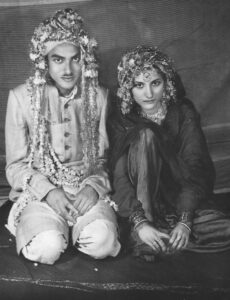 Munizha’s parents, Viqar and Rehana Ahmad, at their wedding in Lucknow, India in 1951.

‘Are we India or Pakistan?’
When my six-year-old daughter asked me this, I was caught like a deer in the questioning stare of her big brown eyes. Should I just give her a decisive answer and sense of identity, or pass on the more complicated narrative I had inherited? It was our history, but was there any need now to elongate the question mark that had shadowed me all my life?

Why the dilemma? My parents grew up in undivided, colonial India in what is now the northern province Uttar Pradesh (U.P.). My father’s ancestral home was in Sitapur, around 50 miles from Lucknow, the seat of ‘Awadhi’ Indo-Persian culture that he was steeped in. Soon after Partition, my grandfather, a well-established lawyer, moved the family to Pakistan – the fact that he had five unmarried daughters was not an insignificant part of this decision. This spelled a loss my dad would never stop regretting.

After getting married in Lucknow in 1951, my parents followed the family to Karachi. But my dad was bent on his dream of studying in England and, leaving their newborn son with my grandparents, they moved to London in 1952. I see my dad’s name on the passenger list of the Polish ocean liner MS Batory. Mum arrived at Heathrow a few months later, dressed in her traditional Lucknowi gharara, a detail she conveys with a giggle.

They stayed longer than expected, living in a numerous digs and working to finance their university studies, and returned to Pakistan in 1961, with my newborn sister. They did well there over the next decade. My dad was a History lecturer at Karachi University, then started to establish himself as a broadcaster and political commentator. My mum, an Assistant Research Director at the Industrial Development Bank of Pakistan.

I have always had a shadow self who grew up in Pakistan. How different would she have been? She will always remain a mystery though because, according to the pattern that seemed to have developed, a new decade and a new baby meant that my parents were on the move again: back to London. If they were going to live in exile, then it would be better to be in London, Dad said. So, unlike my brother and sister, I grew up with only a distant sense of being Pakistani – my grandmothers and cousins lived there, and we visited a couple of times, but what did ‘being’ Pakistani mean when my parents had only lived there for a decade of their adult life and I had not lived there at all? My dad once told me it was a ‘state of mind’.

Growing up wholly in the UK, I was the child who could intellectualise my identity with less visceral ties than my siblings to a home, family and friends left behind. And the food, the culture, the language my parents carried with them was that of their upbringing in U.P. So I have oscillated, sometimes playfully, when choosing which country to identify with. Looking back, growing up in Harrow in the 1970s and 80s, I probably said I was Indian more often than Pakistani to lessen the chance of prompting the word ‘Paki’ in people’s minds.

I was also heavily influenced by my dad, and my main bond with him was through academic and intellectual pursuits. So I took on his narratives of regret over partition, the arbitrariness of borders and the sense of neither belonging to the country you left, nor to the country in which you arrived as a muhajir. In the late 1990s, I went to India with him and also by myself, to rediscover this fading identity. I loved so much about the country and wanted to stay connected with it, even though it felt we were becoming less welcome there. For instance, I noticed how Dad hesitated saying ‘Ahmad’ when taxi drivers with Hindu gods bedecking their dashboards asked him his name. I watched smiles fade when I corrected people who thought I had said I was called Manisha, a Hindu name. Being born in Pakistan also made it difficult for me to get a visa 20 years ago – ‘How come you were born in Pakistan?’, the man at the Indian High Commission asked me. How do you answer that? With the BJP’s Hindu nationalism so rife, I expect it would be near-impossible to get a visa today. I don’t intend to find out.

I also enjoyed making the question ‘where are you (really) from?’ doubly complicated. We all want to place people in categories we easily  understand without investing in stories that make things more complex. I resisted easy definitions and challenged people who enquired to think about Partition and the legacy of colonialism. My daughter’s question, too, was straightforward. She just needed to know what to tell people, and herself. But I wanted her to understand that ‘India’ and ‘Pakistan’ had different meanings in the narrative of each family, and even to different members of the same family. And she then came to her own logical conclusion: her family settled in Pakistan and her mum was born there, so that part of her heritage is Pakistani. She also hears how Muslims are being demonised and further disenfranchised in Narendra Modi’s India and, understandably, cannot see much sense in hanging on to that fraying thread. I, too, have come to recognise the dangers of identity becoming mired in nostalgia.

I wrote this poem around 20 years ago. My dad loved it at the time. I was reminded of it last year when I sat in Brent Town Hall registering his death, and had to tick the ‘Indian’ or ‘Pakistani’ box for his ethnicity. I longed to look at him then, our big brown eyes sharing a secret smile at the absurdity of it all.

The Lascar – a radio play by Shahida Rahman