A Widow and a Single Woman 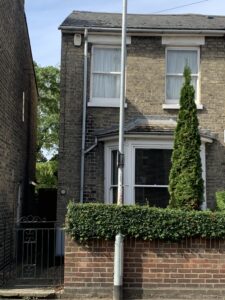 Head of household in 1881 is Charles Edward Head, a 84 year old retired baker who was born in Bury St. Edmunds.  He is married to 60 year old Lydia Susannah (nee Bull) who was born in Ixworth, Suffolk.  The couple married in the parish of Paddington in August 1872.

Lydia’s niece, Annie Elizabeth Woodhead is living with them in 1881.  Annie is aged 11 and was born in Paddington.

Mary Ann Woodhead is also living with them at this time.  She is 71, a widow and works as a dressmaker.  Mary is the elder sister of Lydia and also of Michael Hutchesson Bull, who lives next door at number 117 Sturton Street.  Lydia lived with Mary and her husband in Paddington before her marriage to Charles.

Annie married Walter Driver in 1895.  He was an Estate Agent and a Lay Clerk at Kings College.

The 1901 Census was taken on the 31st March, four days after Lydia’s death, so it records Agnes Bull, aged 36, living here alone.  Agnes is another of Lydia’s nieces.  She has no job recorded on this Census, but she wa previously living in Ormskirk, Lancashire and working as an elementary school teacher.

Back in 1881, Agnes lived at 54 Sturton Street with her parents (Benjamin and Harriet Bull) and brother Benjamin.

The 1911 Census records Michael Hutchesson Bull as living here, having moved from number 117.  He is now 76 years old and a widower, he was married for 51 years and had eight children.  He was born in Bury St Edmunds.

Michael died in 1916 and is buried in Mill Road Cemetery.