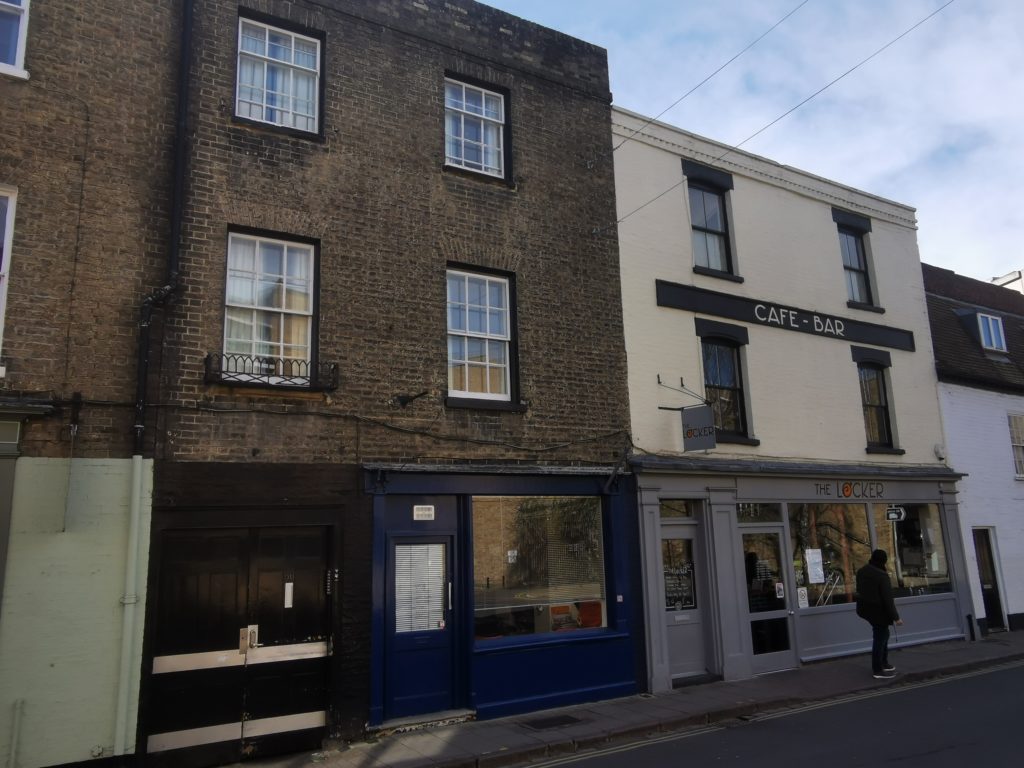 Robert Nichols was found drowned in the Cam. In 1871 his widow Caroline (Mary Ann) with 7 children was still living at this address. By 1881 she had moved to to 89 King Street.

ANOTHER CASE OF DROWNING

An inquest was held at the Red Lion, Grantchester, on Tuesday, before Mr. Grain, deputy coroner, on the body of Robert Nichols, who met with his death under circumstances narrated below.

The Coroner and jury having viewed the body proceeded to the part of the Cam indicated where the body was found, which was about a quarter of an hour’s walk from the Red Lion. Mr French, solicitor, appeared to watch the case on behalf of the family of deceased.

John Freeman deposed: I am a journeyman butcher and live at Cambridge, where I have been in the employ of deceased, who was a butcher in King Street. I last saw him alive at half-past ten on Friday night. He was then lying on the sofa in his keeping room. I spoke to him and asked him how he was. He said his head was very bad; he had been very queer all the day. When he first came in the early part of the morning he tried to cut a piece of meat, but said he could not, as he had such a pain in his head and heart. I have been with him for six years. For the last ten months he has suffered from pains in his head, and he used to take walks by the waterside to relieve it. I have seen him stagger and reel like a drunken man when the pains came on in his head. He was a very quiet man and very cheerful. I have noticed nothing desponding in his manner. On Monday morning about 6 o’clock, I went with Mr Loker and several others, in consequence of some information I had received, down the river to where the jury has been this morning in the Grantchester fields. My attention was called by Loker to a body in the water in a kneeling position. The face was looking towards Cambridge, and with the assistance of others we got the body out, and I identified it as that of Mr. Nichols, my master. On Saturday morning at half-past 7 o’clock he was missed. I have known him frequently take walks by the side of the river and take his pocket handkerchief and bathe his head with it. I have seen him do this Midsummer Common way. I knew him about three months ago to walk out this way; I came with him. It was only when he had these pains in his head.

By Mr French: He went out on Friday morning for a quarter of an hour’s walk because he could not do his business. He was 47 last May. He was in the habit of carrying a pocket handkerchief. I never saw him without. I observed several holes and grips close to the water’s edge on the bank opposite where the body was found.

By the Jury: Nobody suspected that he would put an end to himself. We came to the spot because we heard of the hat being found. I never heard that he slammed the gate when he went out that morning.

Robert Nichols about 12 years of age deposed: Deceased was my father. I saw him on Saturday morning about a quarter past seven, in the shop. He got me a wisp of straw and told me to light the fire. In answer to Mr Wright who was in the shop, he complained that his head was very bad, when he came down stairs. I lit the fire, and soon after I went up and called, “Father, I have lit the fire”, and he was gone. I had not heard any gate or door shut. He often had these pains. I have seen him when he has been obliged to take hold of the be post to save himself from falling. He had had Mr Sherringham a herb doctor, but had had no other doctor. Father was missing all Saturday and Sunday.

Frederick Loker, newsagent deposed: On Monday I, with Freeman and others, started from home about 20 minutes to 5, to search for the body of deceased. We went to the spot which has been viewed by the jury. We had creepers with us. After looking some five or ten minutes, I saw what I thought to be the head of a man. It was about seven or eight feed from the bank. I could trace the outline of the body after looking minutely. It appeared to be in a stooping position, his face being down the stream. I could see the left ear. The creepers turned the body completely up, face and hands uppermost; and after another attempt or two we got him by the frock. We got the body out by lifting. He was a next door neighbour of mine and I knew him well. We did not meddle with him after his body was got out till the police officer came. Information was given to the police constable Tomkins.

By Mr French: I have at times heard him complain of his head, but not very lately. I never heard him speak of putting an end to himself.
By the Coroner: The fingers of both hands were bent, and one of them appeared as if grasping some weeds. I believe I have heard deceased say he never went in the water in his life.

Mr French: He was very attentive to his business. I have frequently heard him at four o’clock in the morning chopping in his shop.

By the Coroner: The water where we found the body was six or seven feet deep. The river appeared to be very stunt there. The deceased was in the habit of wearing a hat like that produced (a black round hat), which was greasy.

Robert John Fynn a lad deposed: who lived at Earl Street Cambridge. Was with three other boys in Grantchester fields on Sunday morning last, between 12 and 1, close to the river. I saw a retriever dog belonging two gentlemen in front of us bring a hat out of the water and drop it on the side. I picked it up and tried to find a name. It was greasy and the top of the crown was bent in. I pushed the hat on to the water with a stick. We were trying to see if we could send it out and one of my companions, Darby, threw a sod which sank it and a lad named Peek told me that afternoon a man was missing and I told him about the hat.

By Mr French: There was a hole very near to the water’s edge. I caught my foot in. If a person caught his foot in and fell forward he would go in the river.

By the Jury: The hat was not sodden only on the crown. I am between 17 and 18 years of age.

Edward Sanderson of Cambridge, deposed: I live in King Street close to the deceased. I have known him all my life at least upwards of 30 years. I last saw him alive on Friday morning when I went to purchase the meat. He said the heat affected him in the day and spoilt his meat and produced violent sudden pain in his head; they came so sudden he felt he should fall if he did not sit down. He said he thought if the weather got cooler his head would get better. He told me he had turpentine or vinegar or some other rags on his head all the week. He has frequently cashed my cheques; the last was on Sunday morning week for £25. I know he had a banking account.

By a Juryman: His mind appeared perfectly right.

P.C. Longstaff deposed: that he took possession of the body of the deceased and had it removed to the Red Lion.

Edward Knowles, surgeon of Cambridge deposed: I knew the deceased in his lifetime, but did not attend him professionally. I made a post mortem examination yesterday. Externally there were no bruises. The body was well nourished. There was froth issuing from the mouth and nose. The countenance was dark and suffused, and the face and head altogether much swollen. I opened the head, and dividing the scalp a great deal of dark venus blood escaped, and on removing the skull cap the dura mater was found very much congealed. There was some serum between it and the arachnoide membrane, which was in a hazy condition from recent inflammation, both on the surface of the brain, and the convolutions. The vascular membrane of the brain was much congested. The lateral ventricles contained each about half an ounce of blood. The lungs appeared dark and congested: the right one adhered to the walls of the chest. The pericardium contained some serum. The heart was healthy. The liver was large and overlapped the stomach. I believe he had a fit and fell in the water and died as much from the fit as the water. I ground this opinion from the result of my examination. I think he had a rush of blood to the head, and by that means fell into the water, when the apoplectic fit increased in intensity and he died. He might have died, and undoubtedly would, if the attach had occurred away from the river, unless he had received immediate medical relief.

The Coroner briefly addressed the jury, after which they returned a verdict of ‘found drowned’.
The funeral of deceased took place on Wednesday last, and the greater part of the houses in the neighbourhood closed their shutters out of respect to his memory.