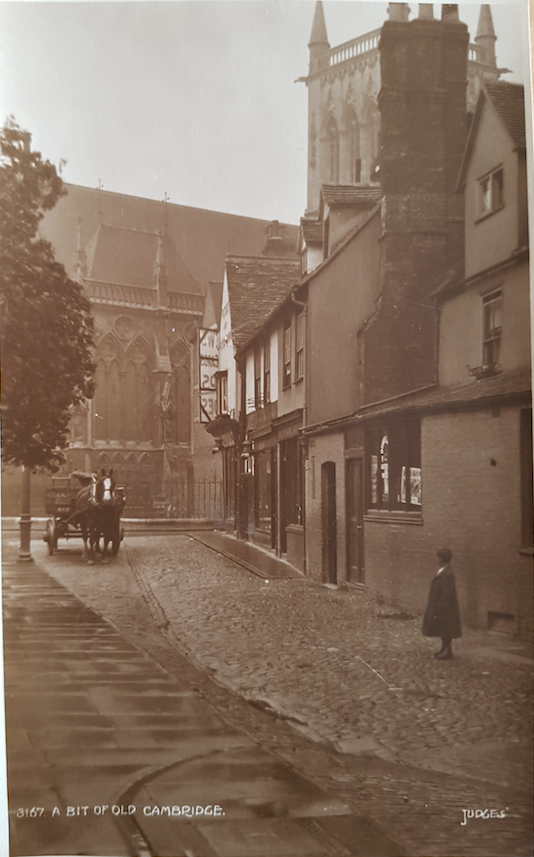 Hannah Holder was the daughter of Samuel Holder, a tailor in Cambridge. In 1823 she married George Scotney Wilson, also a tailor and by 1841 the family were living in Ram Yard , probably at number 2 or 3. By this time they had six surviving (of nine) children, George Scotney, Samuel Holder, Susan Walker, Charles, Frank and Alfred all living as one household. However, by the time of the 1851 census Hannah’s husband had died and the family were beginning to disperse. Hannah was still at 2 Ram Yard with George, Susan and Alfred. There is a Samuel Wilson, who is probably the correct one, living a few doors down, working as a shop boy, Frank was with his grandfather, Samuel Holder, in one of the Cambridge Victoria Friendly Society Almshouses and Charles has not been traced with any certainty.  Hannah died in June 1851 and by 1861 just Susan and her brother, Alfred, are listed at no.3. Susan worked as a seamstress, but she also seems to have done some teaching as her name is listed on an 1871 return relating to the Elementary Education Act of 1870 reporting that she had 20 pupils: 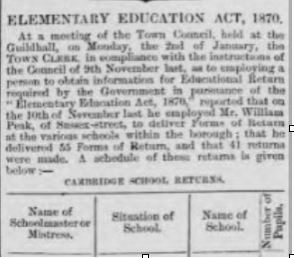 Susan died in the first quarter of 1911, but it is not known whether she was still at this address. Equally it has not been possible to trace her brother Frank after 1901.

However, the wider family did not disappear from Ram Yard, as a grandson of Hannah’s, Alfred Hignell Wilson, son of George Scotney Wilson jnr., lived at number 13 until his death in 1938.