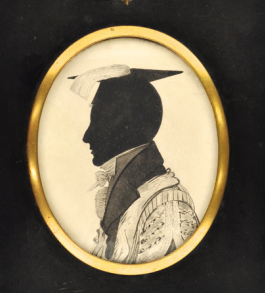 From Profiles of the Past:

Richard Bankes Harraden was an artist of the 19th century, known primarily for his silhouettes of academics from Cambridge University, but also from studies of contemporary academic dress. His portrait work was lively and scholarly, with a high degree of detail.

Richard Bankes Harraden is believed to be the son of a Richard Harraden who exhibited at the Royal Academy in 1799. Both have similar techniques and it is suggested that Richard Bankes was taught by his supposed father. The younger Harraden may have initially lived and worked in France but he spent the majority of his career in London. His artwork was centred on Cambridge and those who attended the university. Harraden used papier-mache frames, an increasingly popular choice during his time as an artist. No trade labels have been discovered.

Although his work has been confused with his alleged father’s, Richard Bankes Harraden was a unique artist in his own right. His most well known and celebrated silhouettes are of ‘gentlemen-commoners’ from Cambridge. These are painted in incredible amounts of detail, with coloured, faithful costume and delicately rendered shirt frills and folds. His attention to detail when painting the hair of his sitters is another defining feature, an effect achieved by using very fine brush strokes. More recently, it has come to light that the younger Harraden also worked on ivory, as well as card. He was a popular artist of his time, and his silhouettes of Cambridge academics are very well regarded today.

He is buried at Mill Road Cemetery: