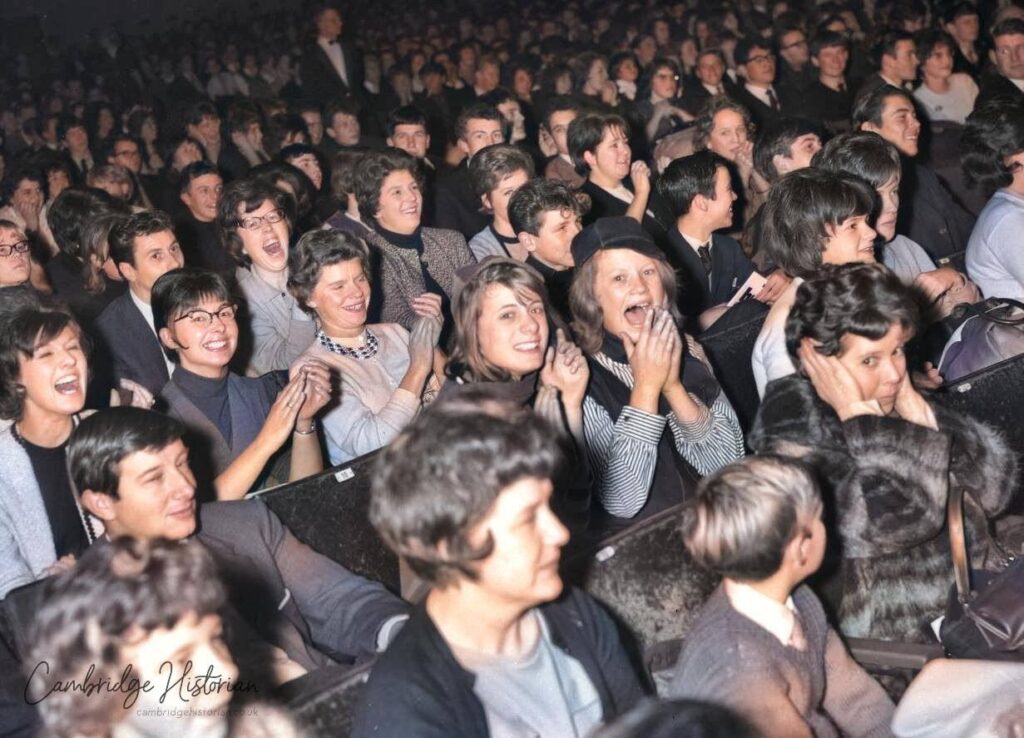 Before the Corn Exchange took over as the primary Cambridge venue for pop and rock gigs, the ABC Regal was the place to play. In pop’s younger days, provincial theatres capable of accommodating large audiences of mostly teenagers were limited, so touring acts often played in cinemas such as those run by the ABC and Odeon groups.

Following an appearance by Cliff Richard and the Shadows in 1959, the sixties saw the pick of the pops at the Regal. Several major names appeared there during the decade and fans from far and wide flocked to St Andrews Street to sit and watch – and scream at – their favourite bands and singers.

Most famously, the Beatles appeared at the Regal twice, both in 1963, but many other famous acts have also played Cambridge. Here are a few.

Early shows often consisted of a ‘pop package’, comprising a compère (usually a prominent actor or celebrity), a headline act – or sometimes two if there was an intermission – plus several supports, all on one bill and each playing around three or four numbers. There were invariably two shows a night, usually starting at 6.15 and 8.30. Tickets cost just a few shillings, depending on whether you sat in the circle or stalls.

The Beatles were initially at the bottom of the bill when this tour started, playing support to the joint headliners Chris Montez and Tommy Roe. Even with only two hit singles behind them though, they soon proved the more popular act. Their first album, Please Please Me, was released three days later. 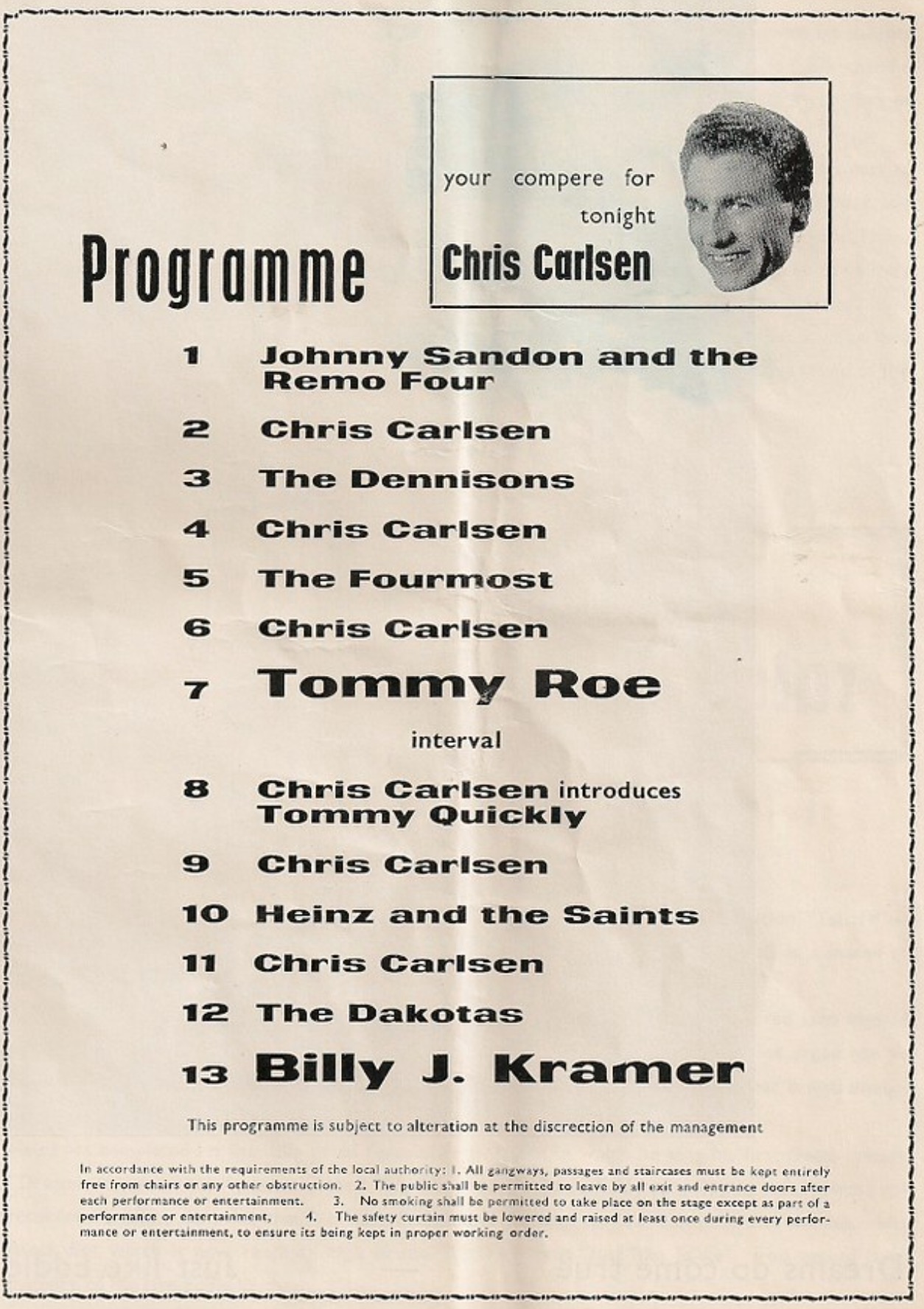 Part of a 60-date tour showcasing some of the most popular early-sixties acts, promoted by pop svengali Larry Parnes as ‘the biggest ever package tour ever to do the rounds of Britain’. The interesting thing here is the addition of the Ramblers backing band, who featured on guitar a local teenager, David Gilmour, five years before he joined Pink Floyd.

The second appearance by the Beatles, this time definitely as the headline act. The Fab Four stayed over the road at the University Arms Hotel, where management banned staff from asking for autographs and threatened dismissal to any members of staff who invited friends onto the premises in the hope of catching a glimpse of their idols. The following day John Lennon, thinly disguised, was given a tour of the colleges by undergraduate (and later filmmaker) Tony Palmer. 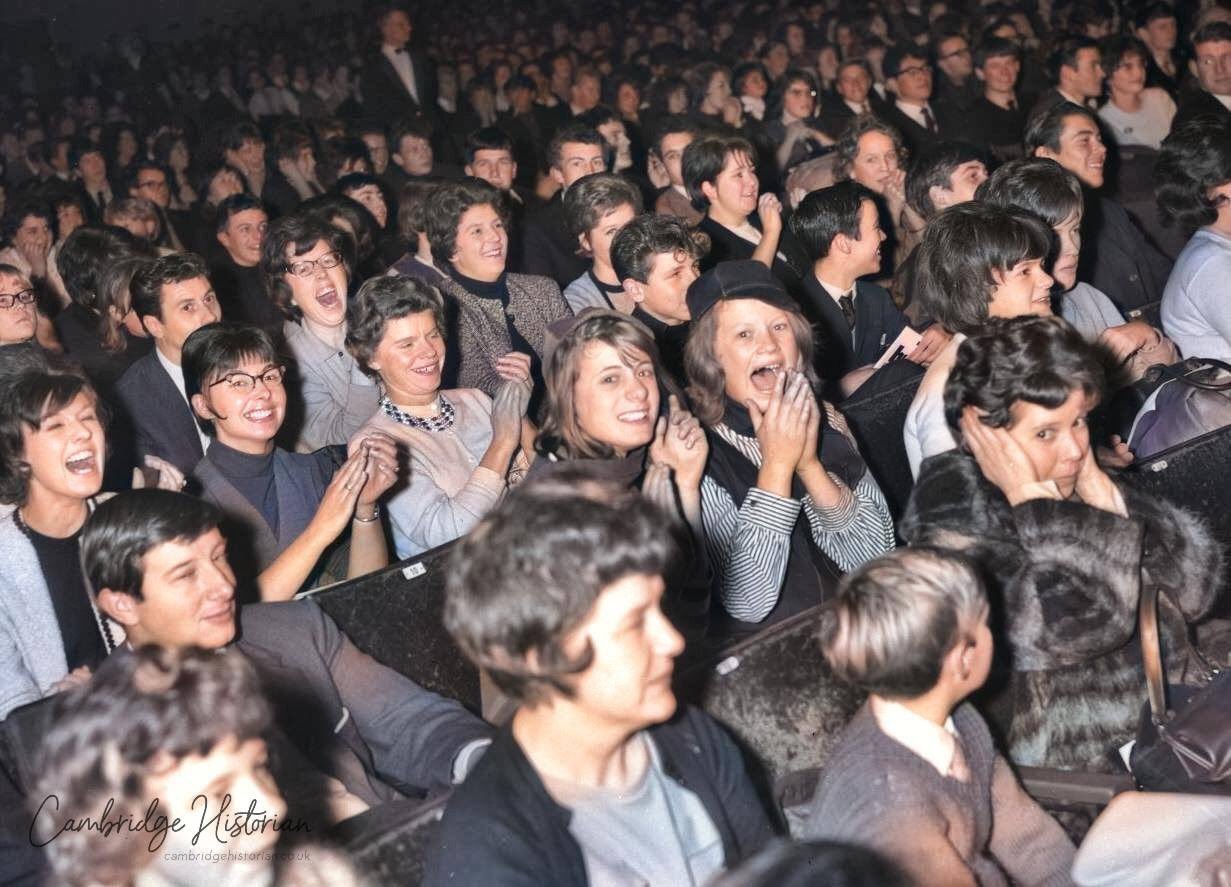 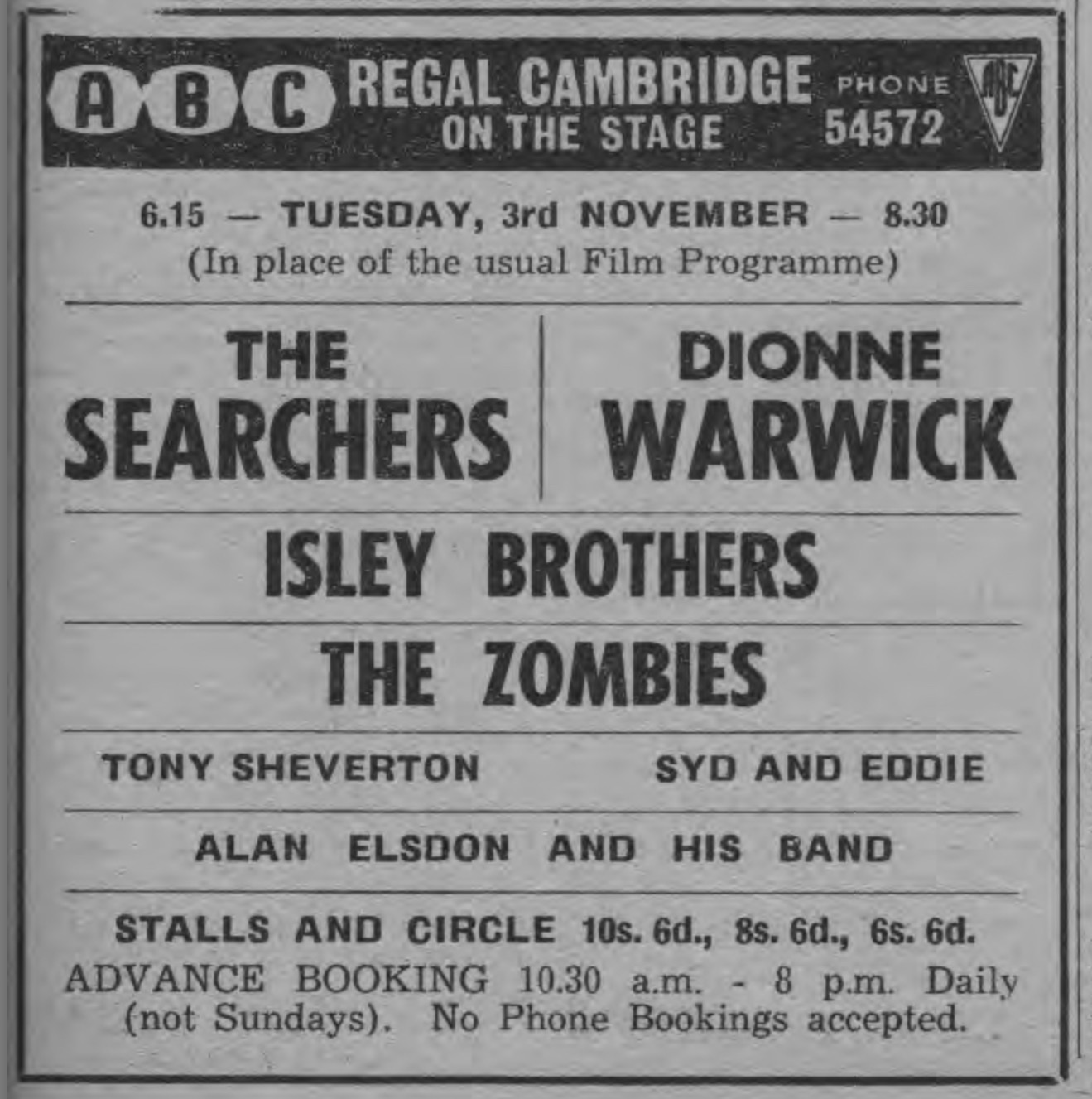 Singer and songwriter Jackie DeShannon definitely appeared on this date, so presumably she was a last-minute replacement for the seventeen-year-old Marianne Faithfull, whose name is on the poster. 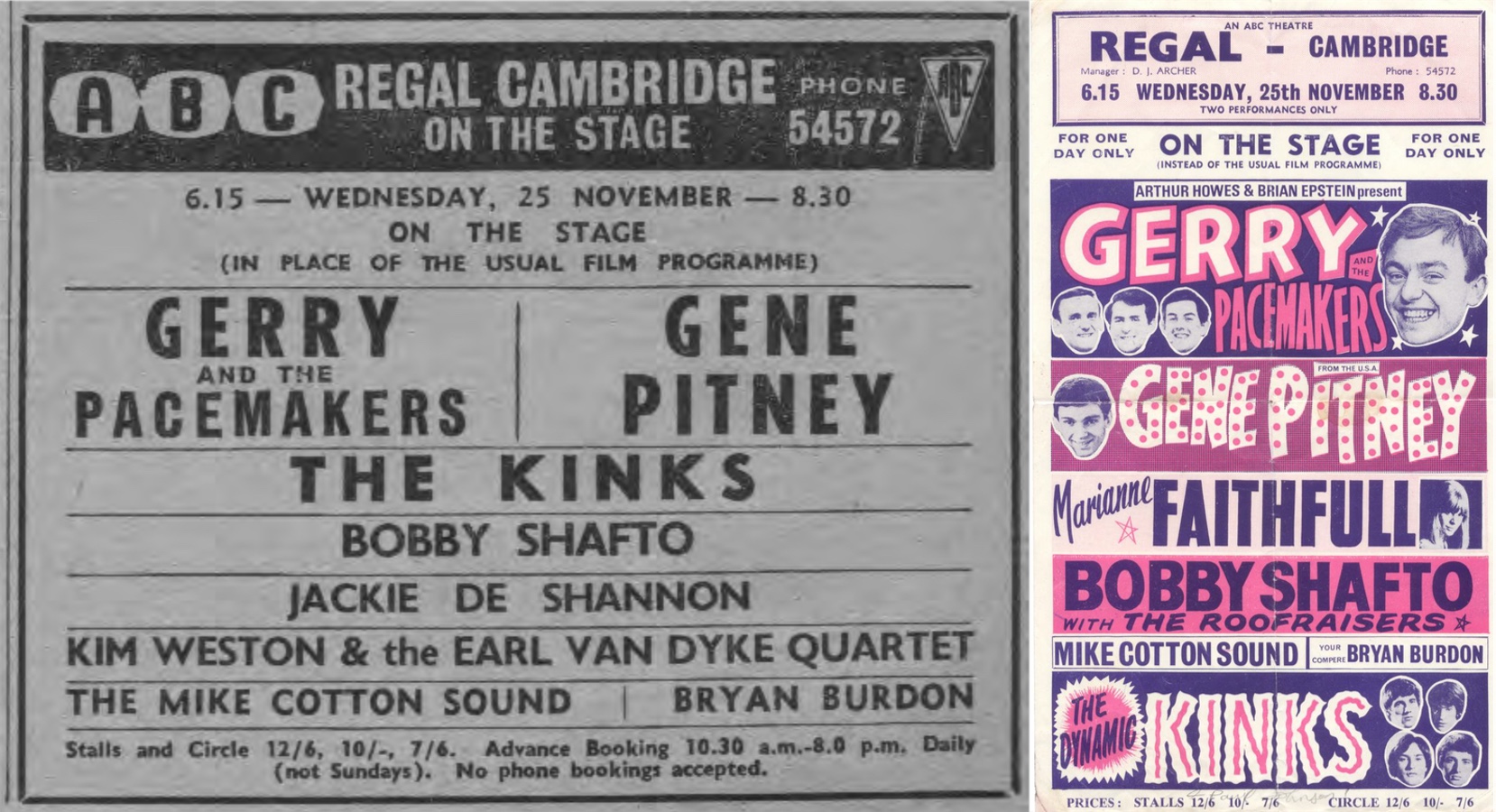 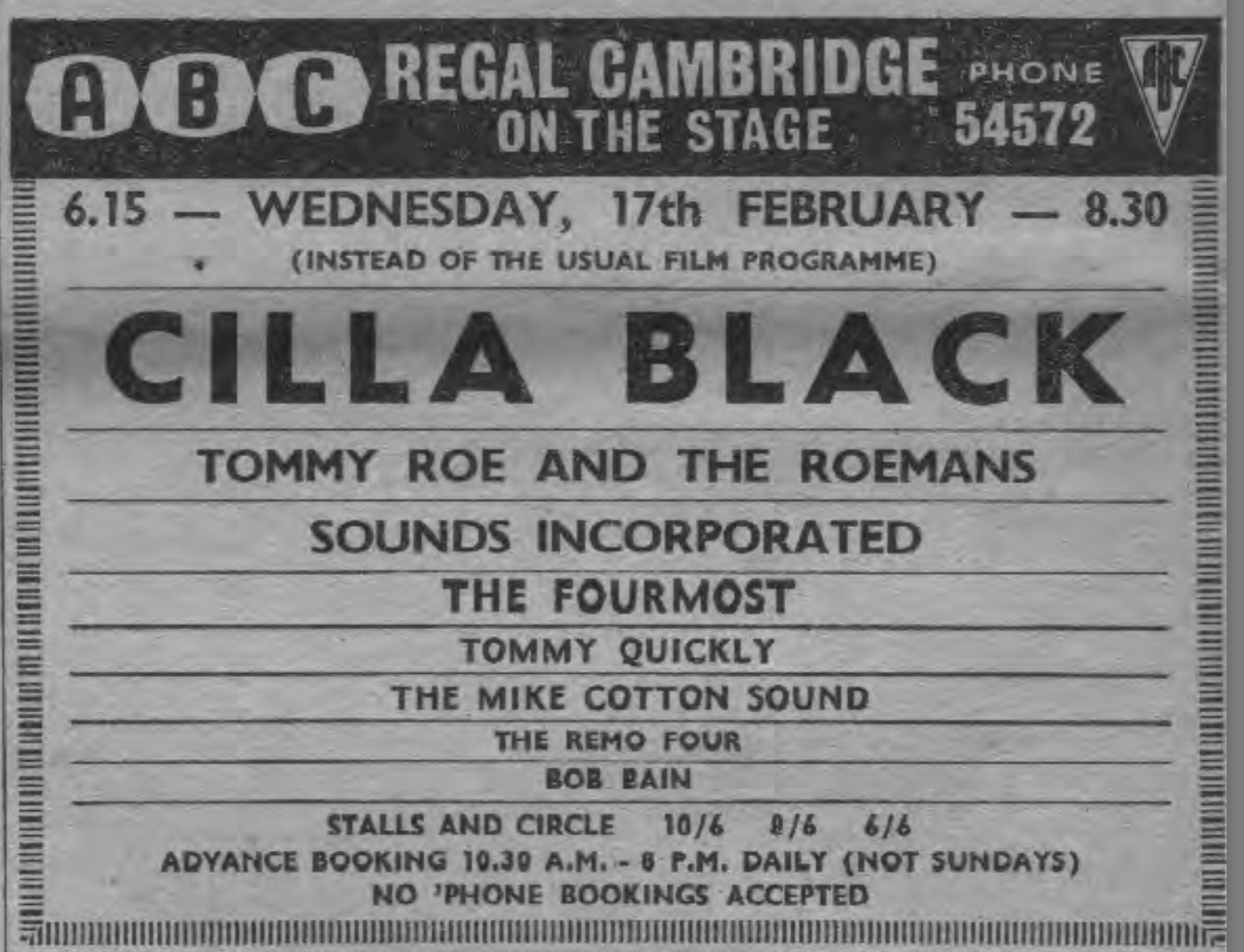 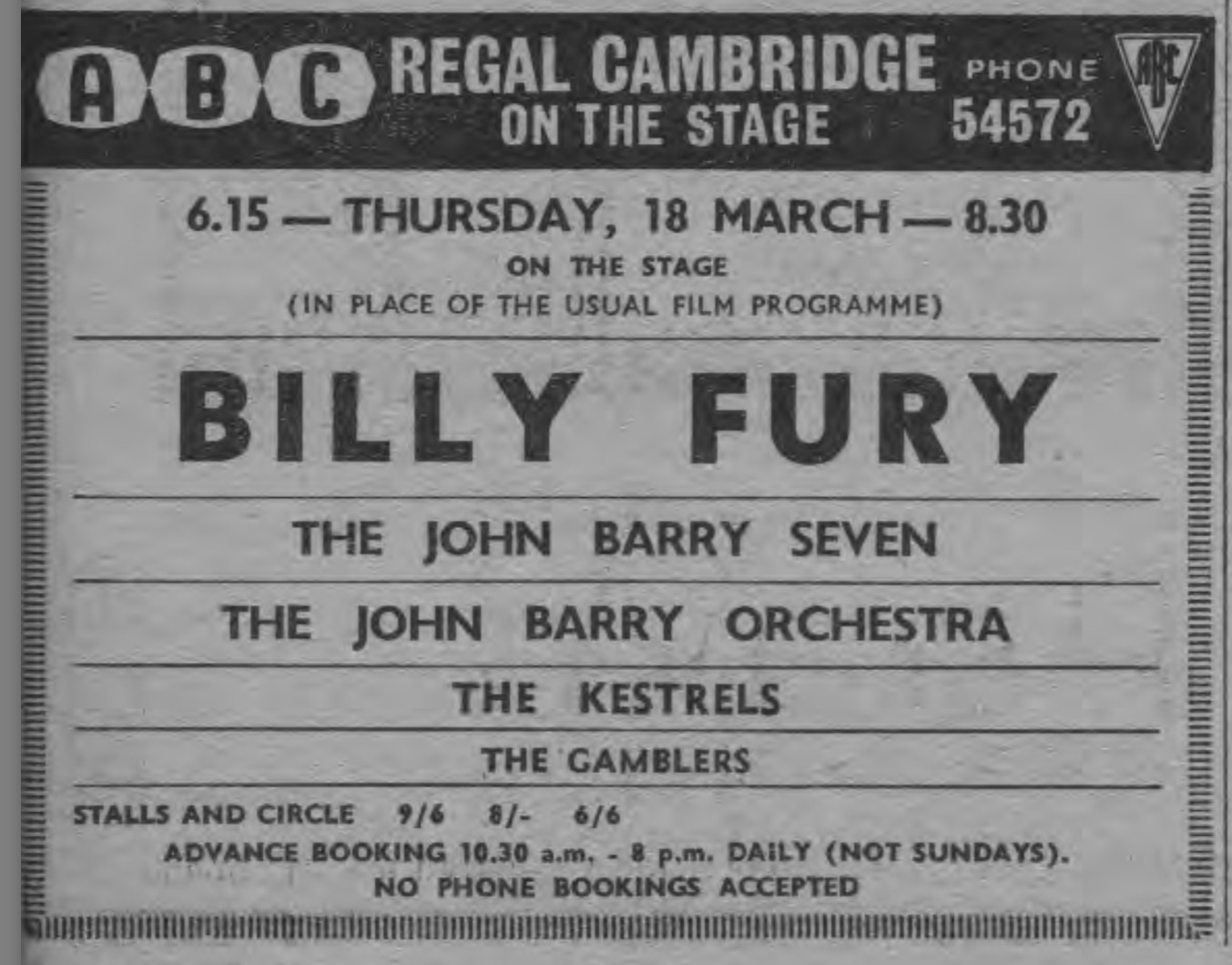 The Rolling Stones’ only Cambridge gig. ‘They’re coming your way!!!’ the advert warned. Top ticket prices were 12s 6d (63p). Rock’s original bad boys had just had a hit with Get Off of My Cloud and were touring the album Out of Our Heads. Lower down on the bill, Charles Dickens was actually fashion photographer David Anthony, who enjoyed a brief career as a pop singer. 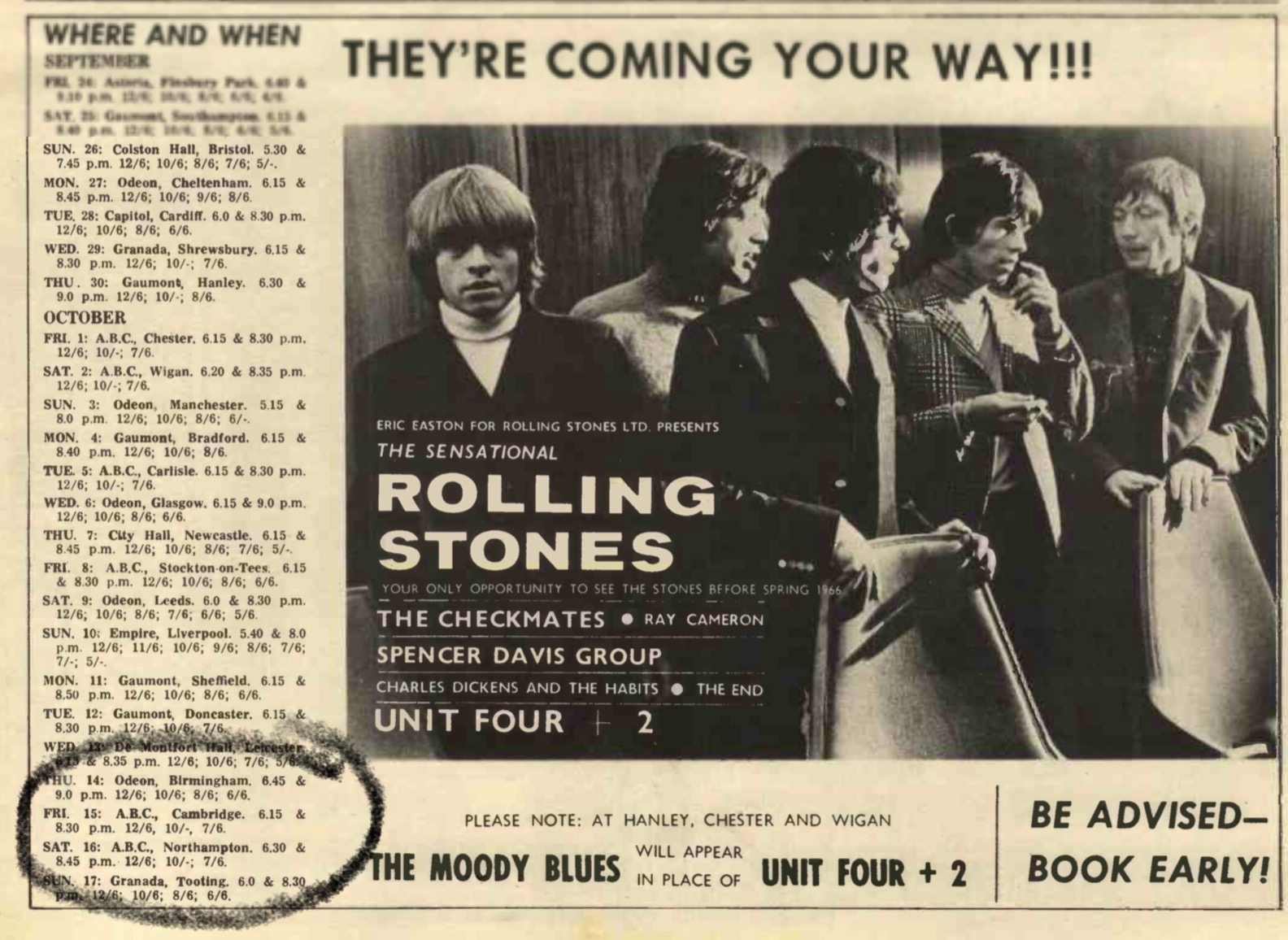 Billed as ‘the Marquee show’, an exciting shot of rhythm and blues, courtesy of two London headline acts that were rarely out of the charts at the time. 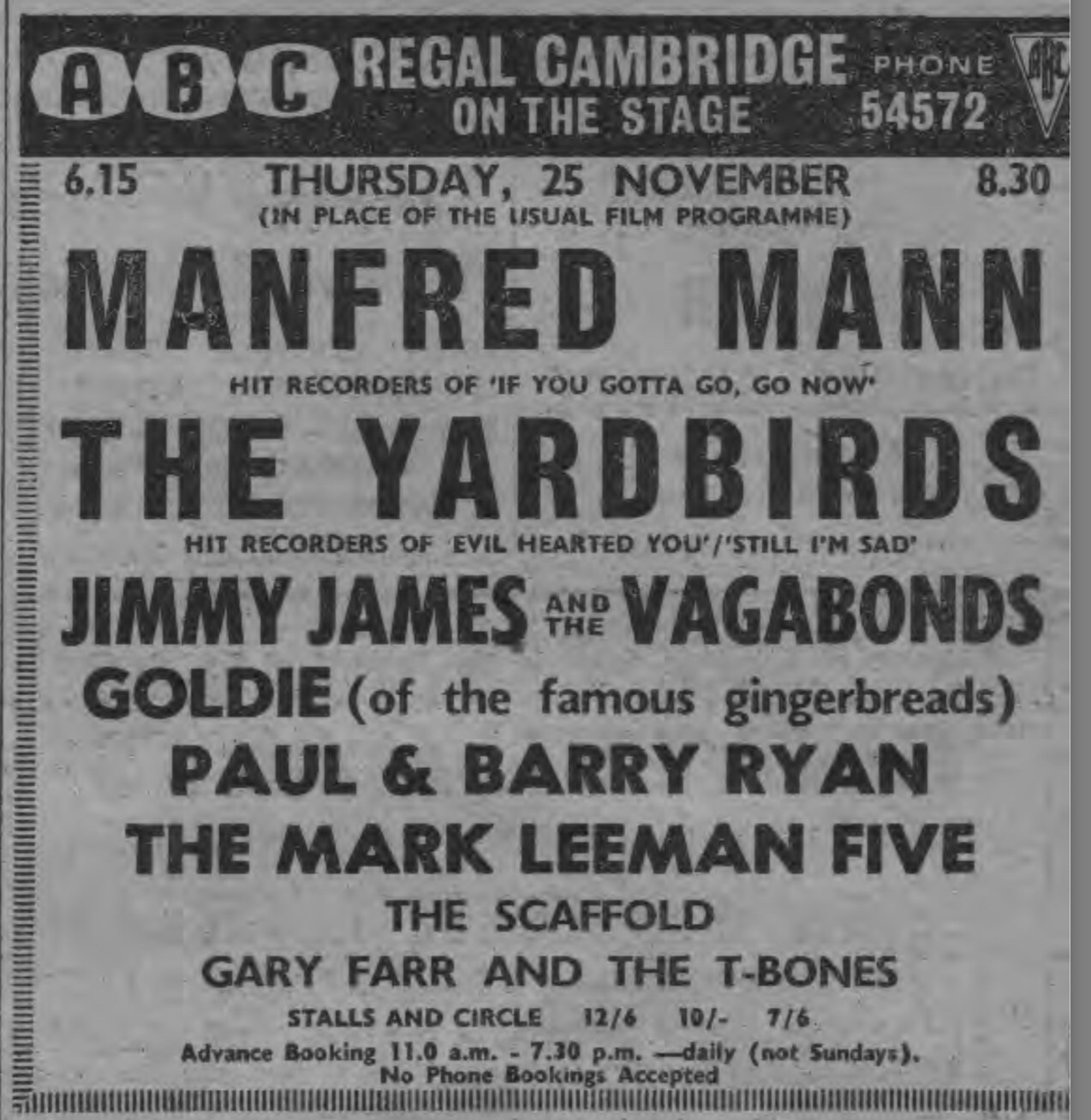 One for the mums and dads. Anita Harris was a last-minute replacement for Lulu on the tour.

Long before disco fever, the Bee Gees were on the ABC/Odeon circuit, with four top twenty hits in the previous year. They were supported by some friends of the Beatles called Grapefruit, and fellow popsters Dave Dee, Dozy, Beaky, Mick & Tich. 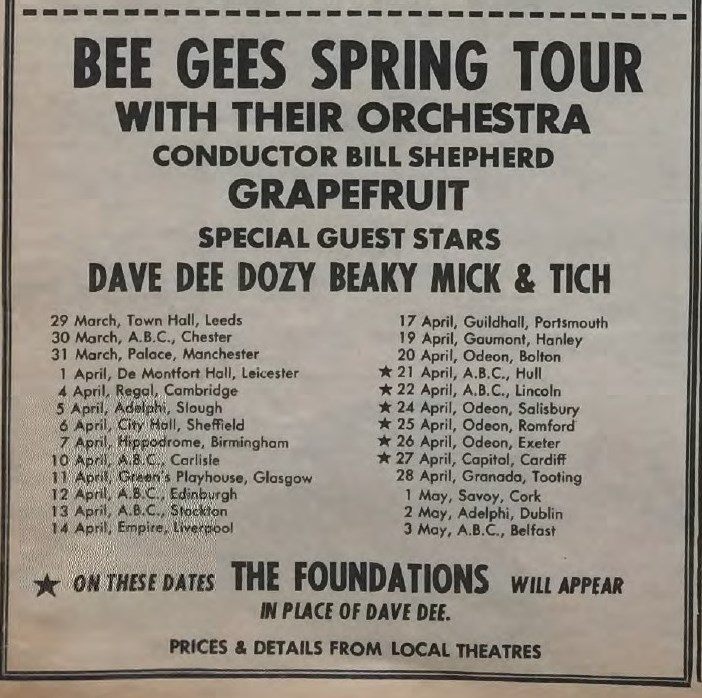 In between albums but promoting their new single, Wonder Boy, the Kinks returned to Cambridge with one third of the Walker Brothers and the Tremeloes in support. 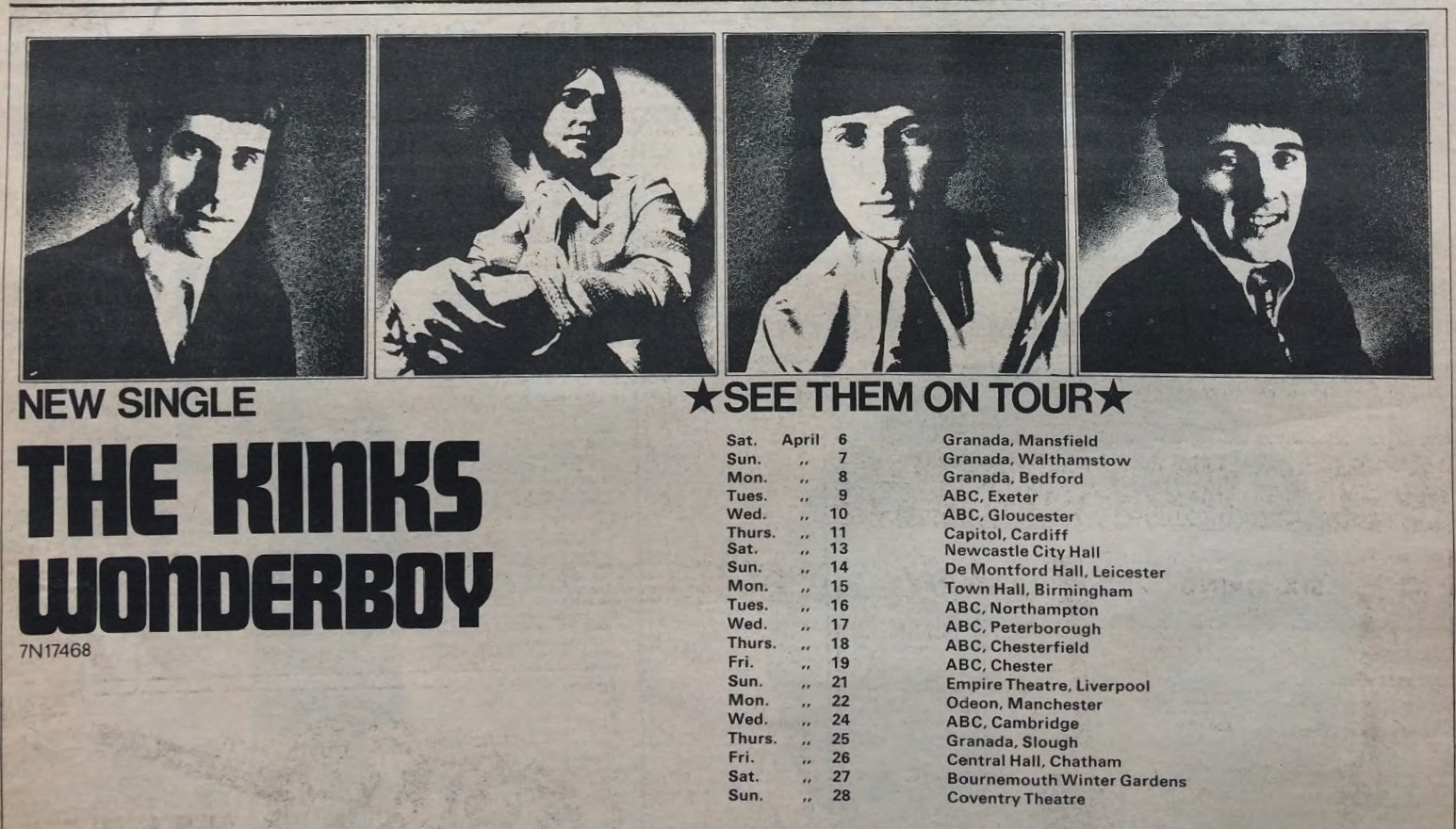 Promoted by Arthur Howes, the man who had taken the Beatles on the road in 1963. Pitney would travel to Cambridge on the tour coach, with his backing band the Mike Cotton Sound, it was reported. Marmalade intended to come by car, ‘so we can get home after’.

Stevie Wonder’s only Cambridge appearance. Stevie, who was enjoying chart success with For Once in My Life, received rave reviews: ‘Whether he’s singing fast or slow, it seems he puts all that he’s got into every note’ 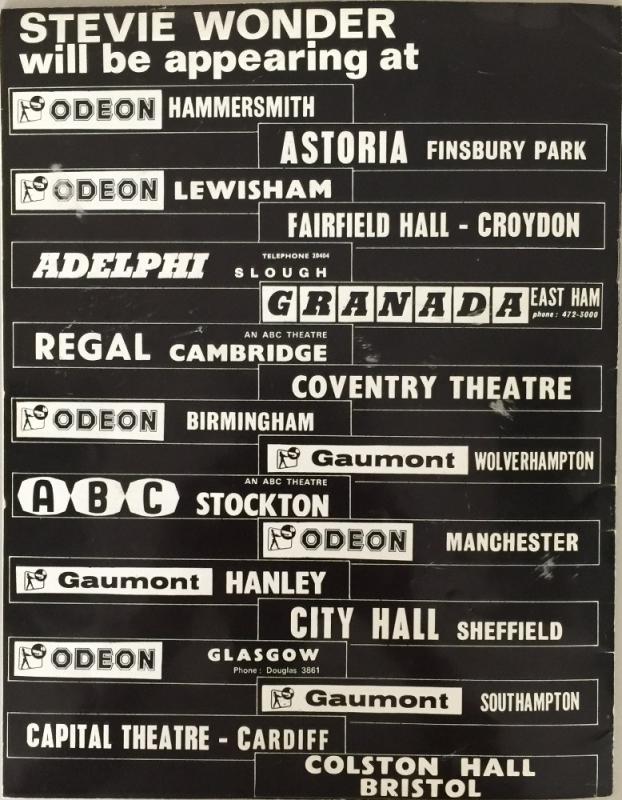 A blues package showcasing B.B. King on first UK tour. The Melody Maker interviewed King backstage at the Regal, reporting that the legendary guitarist thought very highly of his support act Fleetwood Mac, who were then crossing over from blues to pop with the hit single Man of the World.

Having already played Cambridge twice in 1969 (at the Rex and the Midsummer Pop free festival) this influential Scottish psych-folk group were touring their fifth album, Changing Horses. 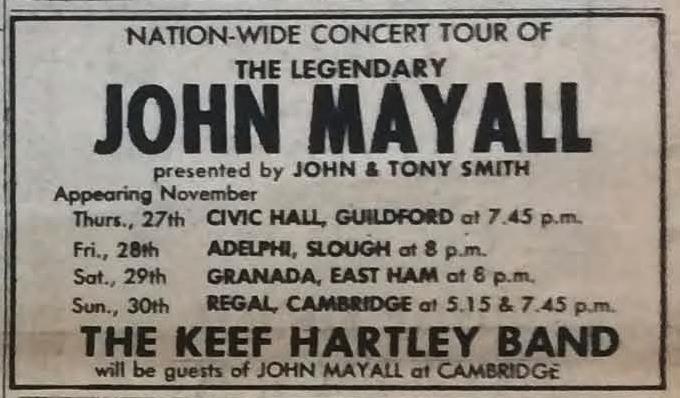 Beatle discoveries Badfinger had already played the Regal a year earlier, as the Iveys, as well as Cambridge’s Dorothy Ballroom several times. Here they performed the usual two sets of twelve minutes each, with Joe Cocker on the bill.

Another blues event, which this time required a colourful poster to advertise it, designed by David Arnott. Ticket prices had nudged up to 15 shillings (75p) by the end of the decade. The poster now fetches over 100 times that in auction. 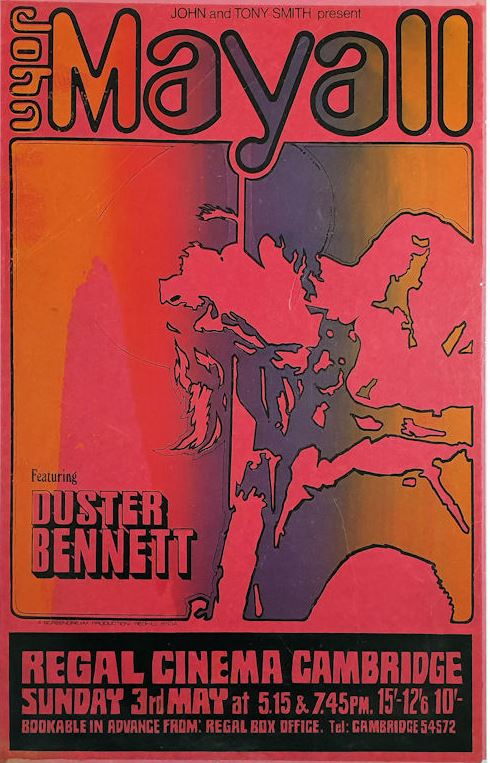 The final three Regal gigs that can be traced emphasise the divergent music that would characterise the early seventies. Andy’s Records new stall on Cambridge market would soon be shifting albums by prog-rock giants ELP and King Crimson to longhairs in Afghan coats. These two gigs were promoted by John & Tony Smith / EG Management, who also handled Roxy Music. Mungo Jerry was strictly for the pop fans. It was reported that, embarrassingly, singer Ray Dorset’s trousers fell down during one number: ‘a roadie had to sneak on stage behind him to pull them up’.

After spring 1971, the Regal seems to have stopped hosting live music. Gigs continued at the Dorothy Ballroom for a while (the Velvet Underground and Hawkwind played there in 1971). But from this point on bands passing through Cambridge would mostly play the Corn Exchange, where there was no seating and, in those days, poor acoustics. But that’s a whole other story… 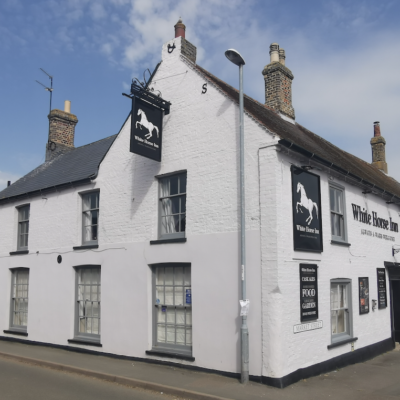