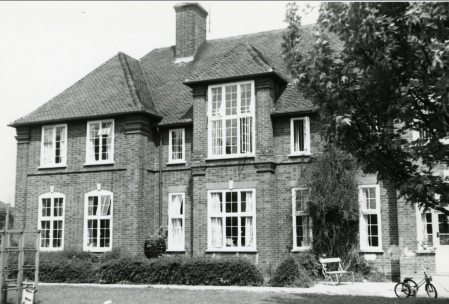 History of the Harvey Goodwin School

It took boys aged 13-15 who were too old to attend the National School but had not managed to get regular employment. Such boys often got into trouble with the police so the school was set up to provide them with instruction in various crafts as well as religious and moral instruction. Initially there were twenty boys who attended each paying 2d per week. The training included gardening, pig-keeping, tailoring, shoe-making and knitting of stockings. By 1867 there was a horse, three cows, a sow and ten pigs.

For more information about the Cambridge Industrial School see:

31st March” Romilly notes in his diary: Lucy’s protégé Joseph Saunders (whom she rigged out with a new suit of clothes) went to the Industrial School today, for which he will have to pay 2d weekly.

Romilly’s editor notes: a site was acquired in Victoria Road and more than £700 spent on building the school which opened in 1850 and closed in 1893. An industrial farm was attached. Romilly was among the thirty present at the subscribers meeting in May 1852 when Harvey Goodwin, as secretary, reported that there were 42 boys on the books, that the government inspector had reviewed their work favourably, and that the committee was £100 in debt. The Chronicle (8 May 1852) reminded readers that ‘no gift is more acceptable to the school than cast-off clothes, shoes, or wearing apparel of any other description.’

Sarah A, 7, daughter, b Chesterton

1864: a small dormitory was created. The school did not however become a Certified Industrial School for the accommodation of boys placed by magistrates.

[In 1861, George Nicholson, 9, is listed with Frederick Webb, 30, labourer, and Anne Webb, 35, together with his brother Wellington, 15. It seems possible that Anne had remarried and George and Wellington were children by her first marriage. It seems that he married Sarah Mitcham in 1881; in 1901 & 1911 he was living at 6 Caius Street;  he died in in Cambridge in 1937]]

[In 1861 Walter, age 2,  is living with his parents and six siblings in Bishops Stortford. His father Thomas, 40, is a maltmaker. In 1891 he is living in the Woolwich Union workhouse, a shoemaker aged 33, with his wife and two children. In 1911 he is a farm labourer in East Peckham, Kent, with his wife and daughter Mabel. He died in Kent in 1937.] 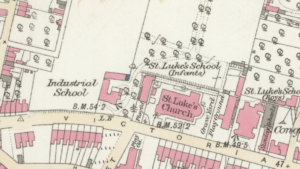 [In 1881 Edwin is living in Harlington, Beds, with his father, Thomas, 34, a police constable, and his mother, Jane, 33, a lacemaker, and five siblings. He joined the Royal Navy in June 1893 and in 1901 he is a leading seaman on the battleship Prince George, in Gibraltar Bay the night of the census. However in 1899 there is a record of him having been a deserter. He leaves the navy in March 1912. His service record shows that he was found guilty of insubordination in 1896 and deserted again in 1907. 15.5.1908 Man informed that provided his character remains “VG” for seven years from 1/1/08 he may apply for the removal of ‘Run’. If his character fall below ‘VG’ the fact is to be reported in order that the question of his further retention may be considered. In 1939 he is living in Harpenden with his wife. He died in 1954.]

1896: The Waifs and Strays Society took over the former Cambridge Industrial School. Under this management the buildings were refurbished and provided accommodation for 20 boys aged 8 -14. The home continued as a place for industrial training and carpentry was popular.

[Sidney was living in the Royal Marine Barracks in East Stonehouse, Devon in 1891. His father Alfred, 38, was a colour sergeant in the marines, mother, Thirza, 38, and four siblings. His mother died in 1896, his father in 1897. In 1911 he is an insurance agent in Barnstaple, Devon. He died in 1925 in St Thomas, Newfoundland, Canada.]

[In 1891 Henry is living in Newark, Leicestershire with his parents and five siblings. ]

[In 1904 Walter is in the Royal Scots (Lothian Regiment) aged 15. Birth place is Balne near Selby. He is a shoemaker. The military record says his apparent age is 14 yrs 6 months; he is 4ft 10ins tall and weighs 87.5 lbs. There is a letter of 9.12.1914 from a Grace Jamieson asking for information about Walter as his fiancee. There is a record of his death on 16th September 1914 at Vailly. This would have been during the First Battle of the Aisne. His mother is recorded as Rose Lee, Burstwick, Hull. Another letter from an officer to his mother explains that the notice of his death in action was first sent to Balne, but returned address unknown. His service record lists several misdemeanours such as staying in bed and refusing to pay a public bus fare. He is described as a good worker at his trade.]

[In 1891, John P Willis, age 1, is in the home of his parents in Oldland, Gloucestershire, William, 27, shoemaker, and his mother Amy, 25, he has two siblings. In 1911 he is living with his grandparents, Joseph and Angelina Pearce, in Bristol working as a galvanised iron labourer. He died in Bristol in 1960.]

[In 1911 Fredrick is a private in the 2nd Battalion Royal Berkshire Regiment in Meerut, India.]

[Frank C Saunders in 1891 was living with his family in Marylebone where his father Henry, 32, was a shop porter, and his mother Emma, was 33. He had three siblings. In 1918 he is recorded serving in the RAF, his wife is Fanny.]

[In 1939 Edward C Marshall is an insurance agent living in Wandsworth, London.]

[In 1911 he is living with his uncle, Henry Sanderson, 41, head man at a racing stable, with his aunt and five cousins. He is working as a stableman.]

{There is evidence he served in the army in WWI.]

[In 1911 he is serving in the 1st Btn South Staffordshire Regiment in ‘Arabia, Cyprus, and Gibraltar.’ Occupation is shoemaker. He was killed in action on 7 Nov 1914 in France.]

May Gifford, assistant matron, 23, b Cambridge

[May have have travelled to and from Canada circa 1925]

[In 1901 he is 1 and with his family in Guildford. There is a mother, Harriett, 28, charwoman and two siblings. There was a father, William, 38, not in the census. In 1923 he seems to have emigrated to Chile where he had about nine children with Maria Estelle Harvey (nee Guajarde). The family returned to England in 1936. He died in 1979. For photo see Ancestry]

[In 1901, Maurice, 1, is living in Cheshunt, with his mother, Emma Dunn, and grandparents, Thomas, 54, bricklayer, and Charlotte Kirby, three siblings and an aunt and a cousin. He died in Herts in 1944.]

[It seems very likely that this is the same Robert Robinson Smyth, b 7/5/1900 in Hartlepool, Durham, who was killed on 31st May 1914 during the Battle of Jutland. He had started service in the Royal Navy in September 1915. He was a 1st Boy on HMS Queen Mary which was sunk by enemy gunfire with the loss of over 1200 lives.]

[This is most probably Frederick Henry Clary who was living in 1901 with his family in Suffolk. William, 29, was an engine turner, Ellen was 32, and Fred was the youngest of five children. He died in Chelmsford in 1989.]

[Brother of Robert, above.]

[This is probably Frederick George Flint, born in Coulsdon, Surrey in 1905]

The Harvey Goodwin Home for Waifs and Strays

1914: the home was closed because of its deteriorating condition. 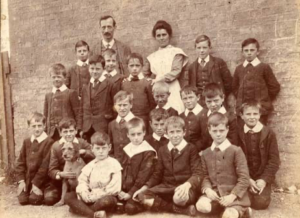 Harvey Goodwin School – boys with master and matron circa 1916

1924: foundation stone of new home laid in July on site to the north known as St Luke’s Fields. It was officially opened 1st October 1925. The home could now hold 31 boys up to the age of 13. The Harvey Goodwin home set up its own Boy Scout troop and Wolf Cub pack.

1939-1945: The home continued operating during WWII taking in boys evacuated from other homes that were at risk of bombing.

This was the home of the 8th Cambridge Scouts.

1947: the home was converted for use as a nursery and was reopened 2.10.1947. the nursery provided accomodation for up to 20 children who were waiting adoption or boarding-out. It was also a training centre for nursery nurses.

1970s: the focus shifted to that of older children. In 1972 the residents of the Society’s St Agnes Home at Pevensey moved to Cambridge and the property was renamed Harvey Goodwin House.

The  home closed and the building was used for private residence.

For more information on the Harvey Goodwin home see: 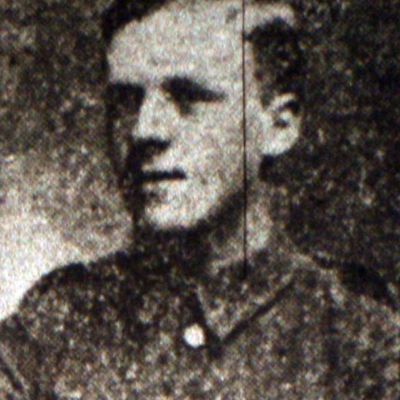 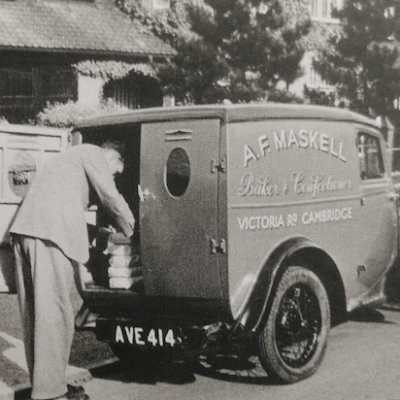 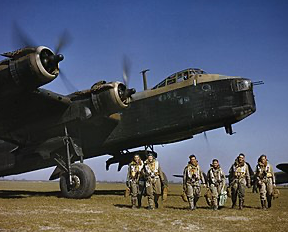 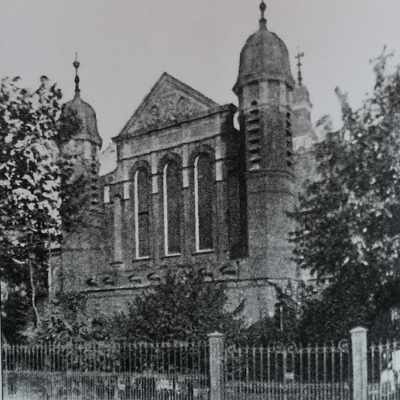 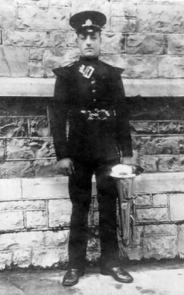