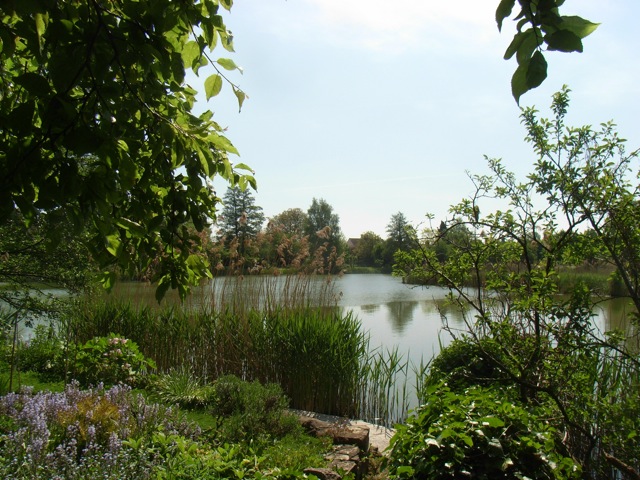 The location from which George Bolton quarried his bricks, now a private lake.

The history of Bolton’s Pit Lake is covered in the story of George Bolton.

There is also information on the pit on Geograph.

Jack Roach of 77 Barton Road wrote an account of the lake in which he said it started life as a rubbish dump: In the sixteenth century Cambridge citizens disposed of their household refuse … by scattering it outside their houses in the nearest lane or ditch. …. In 1575 rubbish pits, called ‘dungells’ were established just beyond the limits of the town.

The rubbish pit here, at Fulbrooke Field, has yielded objects date to 1612. The earliest document mentioning it is from 1737.

In 1888 the land was bought as a brickyard by Edward Bolton. The subsequent diggings may have released water from underground springs which they flooded the area.

Purchased by Smart family, clothiers etc of 11 Market Street. They  used the location as a summer retreat and built a summer house and rock garden. They let locals use the lake for bathing, boating, fishing and skating.

Some time after 1962 the lake was bought by locals W K Lacey and Paul Quiggin for £13,500 split between them. The various parts of the lakeside were sold to local houseowners.

1982: The CWN included the following description:

The lake is home to six species of wildfowl. ‘More than 100 Mallard rest on the pool during the day,’ says James Cadbury. [Head of research at the RSPB then who lived next to the lake.] ‘ Then at dusk and again at dawn they fly onto the neighbouring potato fields.’ Swans and great-crested grebes and coots are attracted to the reed bed on the submerged island in the middle of the lake and when the kingfishers which breed in Newnham, are feeding their young, Bolton Pit is a favoured feeding ground for them.A roost of 4,000 swallows and pied wagtails frequent the lake where a colony of reed warblers build their nests. … Sometimes when it is a hard winter, the lake, which is about 14 feet deep, freezes over, and then there is skating…. The lake, which is one hectare in size, is owned by Paul Quiggin of 6 Grantchester Road.