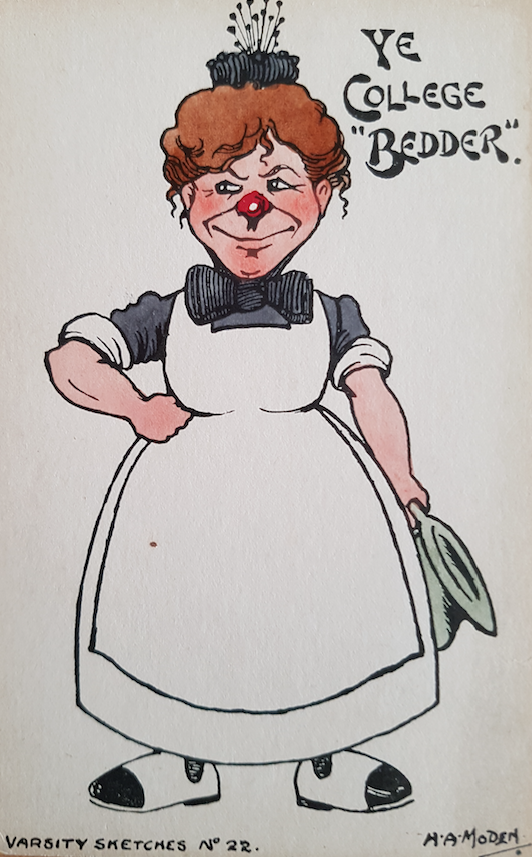 College Bedder by H A Moden

Florence A, 11, b Cambridge

Louisa A, 78, mother, widow, living on own means, b Norfolk

Norwich Street was a one-way thoroughfare and, initially, Cordelia approached it from the wrong direction. It took her some time to find her way back to Hills Road, past the Roman Catholic Church and down the fourth turning to the right. The street was terraced with small brick houses, obviously early Victorian. Equally obvious, the road was on its way up. Most of the house looked well cared for; the paint on the identical  front doors was fresh and bright; lined curtains had replaced the draped lace at the single ground-floor windows and the bases of the walls were scarred where a damp course had been installed. Number fifty-seven had a black front door with the house number painted in white behind the glass panel above… The front door was wide open. Cordelia pressed the bell and stepped tentatively into a narrow white hall. The exterior of the house was immediately familiar to her. From her sixth birthday she had lived for two years in just such a Victorian terraced cottage with Mrs Gibson on the outskirts of Romford. She recognised the steep and narrow staircase immediately ahead, the door on the right leading to the front parlour, the second door set aslant which led to the back parlour and through it to the kitchen and yard. She knew that there would be cupboards and a curved alcove on each side of the fireplace; she knew where to find the door under the stairs ….