Rev Conybeare, far left, and friends in the garden of Stokeslea

1898: J W E Conybeare moves to Stokeslea (former Lensfield Cottage). The house had  access from Union Road with large gardens extending to Lensfield Road  and adjoining the rectory garden of the new catholic church which stood at Hyde Park Corner.

John William Edward Conybeare, clergyman Church of England [Conybeare was an Anglican minister who converted to Catholicism and became a leading member of that congregation. In the 1891 census he is Vicar of Barrington living in the vicarage on Foxton Road.]

(10a) William J Fordham, 38, toy and confectionary shopkeeper, b Cambridge

John William Edward Conybeare, 67, author, b Lancs [Vicar of Barrington who wrote A History of Cambridgeshire that was published in 1897]

Edward Conybeare not only supported Canon Scott in his ministry of the Cambridge Catholic Mission during WWI, but his diaries are an important record f the period in Cambridge. ‘Catholics in Cambridge’ ed Nicholas Rogers, has many excerpts from these diaries. Many soldiers were Catholics, especially those of the Leinster Regiment; on 23rd August 1914 the church had 5 successive masses for over 3,000 soldiers.

For 19th December 1914 the diary entry records ‘Billeting begun for 17000 troops – first in Cambridge since Civil War.’ The church was set up with recreation rooms for soldiers. Conybeare also seems to have set up pre-arranged bath facilities at his own house, Stokeslea. 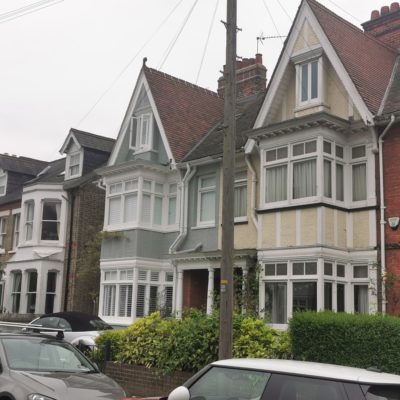