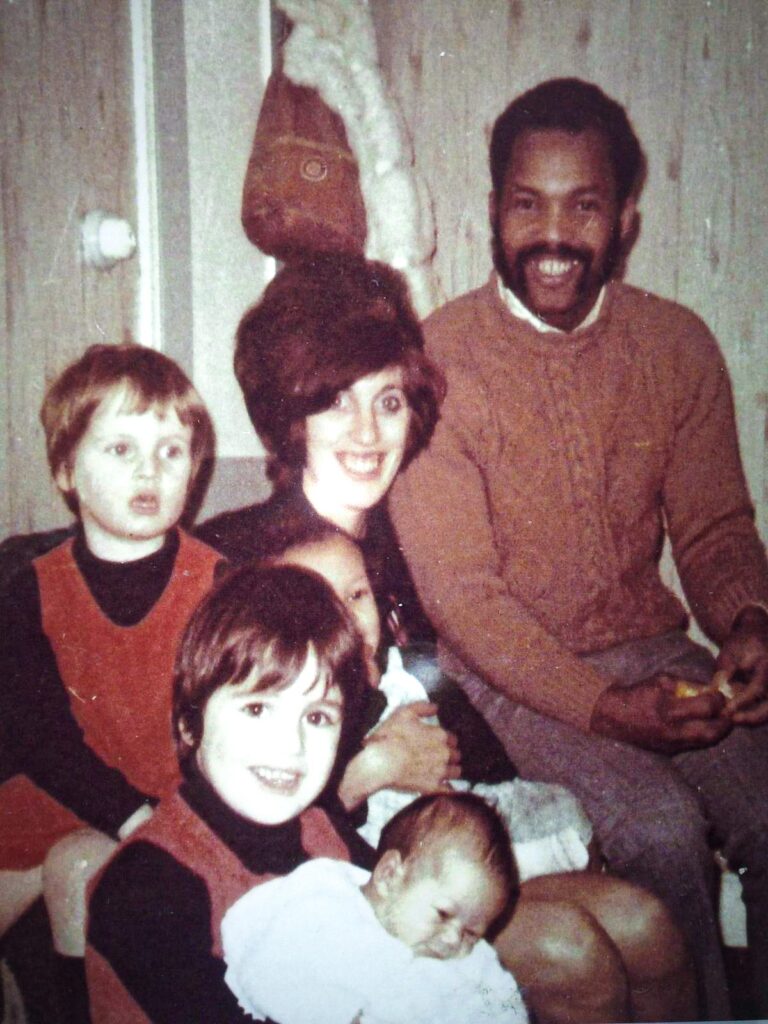 “I was two and my sister, Lucy, was one when our mum, Lorna, married my step father, Albert Gordon, in 1969. Lucy and I grew up calling our step father dad. Dad had come to England from Jamaica on the 14 April 1960.

Dad and mum ran the Midland Tavern pub in Cambridge from 1969 – 1977 + approx. The pub was the hub of the Caribbean community and my childhood memories there are of a vibrant, exciting time. Loud 70’s music played every evening in the pub’s big hall that we lived above and I have memories of selling patties to our customers from our back door during special occasions. The songs I remember playing each night were Kung-Fu Fighting, Al Green and Bob Marley songs, George Mc Crae ‘Rock Your Baby’ and Hues Corporation ‘Rock the Boat’ to name a few. As children we would phone downstairs to the bar to put in our ‘special requests’ for our favourite songs and mum and dad would let the DJ know for us. 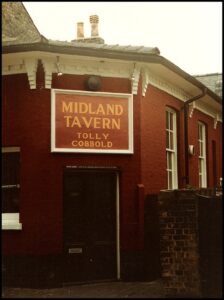 Mum and dad were like a movie star couple. Dad was so cool and strong, mum was tall and very glamorous. They both loved people and being the Landlord and lady of the Midland Tavern, in the early 1970’s suited them so well. They were very loved in the community.

I was the oldest of 4 children, four of us under the age of four at one time. My sister and I from our mum’s first marriage and my two brothers from mum’s marriage to dad.  As children we were very close, I was a very ‘motherly’ big sister often feeling I was mini-mum to them while dad and mum ran the pub downstairs. 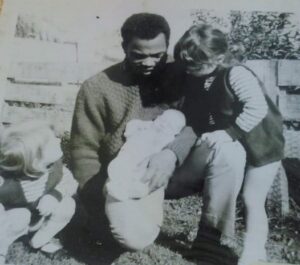 Dad would tell us stories while peeling fruit with us four children sitting around his feet watching him make a telephone line out of an orange peel. Dad would share one piece of fruit with us whether a mango, orange or an avocado, whatever it was we would wait for dad to share as he told us stories of when he was young in Jamaica. The stories varied but included brer Anansi, a big spider that would get up to mischief, antics that dad and his brothers used to get up to growing up, the history of Jamaican resistance to colonialist rule, the Maroon wars and also about the native people of Jamaica, the Arawak’s [believed to have first come to Jamaican from South America 2500 years ago] .

Our lives were always very fast paced and full of adventure.

Dad’s oldest daughter Jen lived with dad’s mum, affectionately known as Del Del, in Peckham, south London. They often came to stay with us in the pub. Jen was about five years older than me and we loved to see her. Jen would tell us the most amazing stories and kept us up to date with the latest fashion accessories from south London, ‘the granny shoes’, songs like ‘Casanova’ and a bit later the new lovers’ rock style of music. I remember as children we felt very special to have a big sister from London. Dad would often take us all to visit Jen and Del Del in his black and red Ford Capri. No matter how many family members came to visit there would always be room in the flat in Peckham for everyone and plenty of food. On one occasion mum came to pick us up from school in a big black cab. Mum had her sunglasses on and white fur coat looking glamorous as ever and we took the train to London to stay with Jen and Del Del for a few days. The trains then had carriages so mum and four children filled one. Our lives were always very fast paced and full of adventure.

At approximately age 4 my brother Marcus used to make up very detailed stories about a character called ‘Nicky Night’ and would sit and tell these to the customers in the bar, to anyone who would listen. Marcus would sit for hours chatting to the customers who enjoyed his stories. My brother Julian used to have convulsions and on one occasion had such a high temperature that we all had to collect ice from the ice making machine in the bar and pack this around Julian’s little body. He must’ve been very young at the time. I remember another time when he stopped breathing and dad had to throw him up in the air and catch him which seemed to help. Julian’s birthday was the day after mums and dad always said that he was mum’s birthday present. The pub customers would call Julian ‘little Albert’. 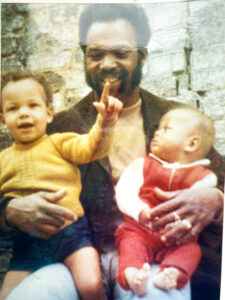 Lucy, Julian, Marcus and I were sometimes allowed to have a bottle of coke, in the original shaped hour glass bottle, and a packet of crisps. As we sat around one of the tables in the back bar room that became a disco at night, we used to lift our coke bottles in the air together and say ‘cheers to the landlord’. To this day we still say this to each other when we meet up. I was four when my youngest brother Marcus was born so on reflection mum and dad would have been very busy with four children so young and running the pub at the same time.

Dad and I both loved milk and in the 70’s there was a promotional advert to encourage everyone to drink more milk. The caption was ‘watch out watch out there’s a Humphrey about.’ Dad and I used to have milk drinking races with a bottle of milk each from the fridge. I must have been about 7. I cannot remember who won those competitions. Dad would also make us Guinness punch which we loved. The headmaster of our primary school came into the pub one afternoon and sat chatting with dad at the bar.

Alex Hailey’s epic family biography, Roots, had a huge impact on our family when it first screened approx. 1977. I remember being very sad that mum and dad would not allow us to watch it when it first came out, as they thought we were too young at the time, but we would sit behind the closed door of our living room to see what we could hear as mum and dad watched this together. 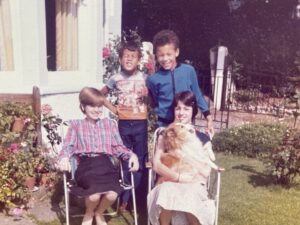 Before I left the pub I remember reading E R Braithwaite’s book, Honorary White. E R Braithwaite also wrote To Sir with Love sharing his experience as a young black man teaching in London in the late 1950’s. Honorary White was the chronicle of the author’s experience and witness of brutality, oppression and courage that he witnessed as a black man during his six week visit to South Africa at the time of the apartheid regime. I must have been between the ages of 7-10 when I read this book as we left the pub approximately late 1977 I believe.

The cricket team was also at the heart of the community and we often went to watch the team play when they were playing on Parkers Piece. Dad was a member of the team and an excellent bowler.

The community spirit at the pub was a very close one. Everyone felt like an extension of our family. As a family we often went to house parties and played with the children while the adults danced and socialised. Everyone was very close.

The Apostolic Church Next Door

The pub was number 1 Devonshire Road and at number 4 was the Apostolic Pentecostal Church, then part of the Bibleway family of churches. The pastor was Pastor Robert Campbell. One night the
police came to the pub approx. 2am as a neighbour had complained of noise. On this occasion though the noise was not coming from the pub which was closed, but from an all-night prayer meeting happening next door at the church.

Another early memory I have of the church was when one of the pub’s customers, Mr Foster, got ‘saved’. One Sunday Mr Foster came to the pub and bought his last round of drinks for everyone. He went on to become a deacon in the church.

As children we would be sent to pastor Campbell’s Sunday school and these experiences were my earliest memories of our apostolic church beginnings. As young teenagers, Lucy, Julian, Marcus and I were all baptised at the church, after mum passed away suddenly age 38. Losing mum was a very challenging time for us all and the church became a place of comfort to us. Jen and Dad went on to be baptised too.

The Midland Tavern in the 70’s, with mum and dad behind the bar, was a moment in time and an experience that can never be repeated. The personalities and characters of that time are treasured memories that we chat about as a family with fond reflection.”

Extracts from an interview with Albert Gordon in February 2016. Interviewed by  Lucy Walker on behalf of The Mill Road History Project, Funded by the National Heritage Lottery Fund.  The full interview can be heard here: www.soundcloud.com/camblackheritage/albertgordon 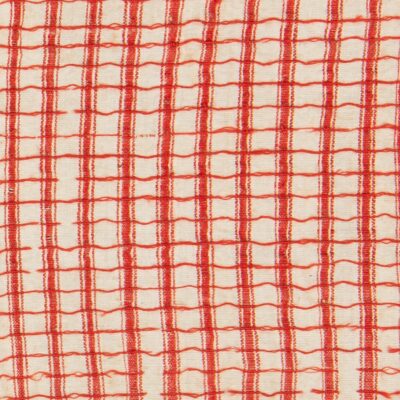