1894: CIP 9.11.1894: ALLEGED THEFT. Thomas Merryweather and Herbert Allgood were charged with stealing a quantity of clothing, the property of Henry Hopkins, of 153, Gwydir-street, the value of £1, between the 22nd and 26th October.— Prisoners admitted the offence.— The Prosecutor said he removed from Chesterton-road on the 2nd October. He put some of his goods in a stable at the bottom of Catherine-street. He missed most of the things on the 26th. —The stable was not locked, but the gates were. He identified the shawl as his property, which, among other things was the stable, and he valued it at 3s. On the 23rd he saw Merryweather in another building. Mrs. Hopkins, wife of prosecutor, identified the articles as her property, a white skirt, scarlet flannel skirt, a small black shawl, and part of a duster, which had been torn in halves. Nearly everything was taken out of the stable She valued them at 5s.—Wm. Shield, of 113, Fitzroystreet, manager to Messrs. Cole and Sons, pawnbrokers, said he knew Merryweather very well, and he brought the articles produced on Saturday, the 29th October, to pawn. He said they belonged to his mother. He advanced 1s. on the goods. He did not know Allgood, but he identified him the lad who pledged the shawl, petticoat, and a towel on the 13th October. He said he brought them for Mrs. Polly Coe, and received a shilling for them.— The police asked for a remand till Friday, which was granted.

May Kimpton, 15, domestic service, b Cambridge

There was reception, only the nearest relatives being present. The bride and bridegroom left later in the day for Northampton, where the bridegroom is stationed. They were the recipients of many handsome presents, including a solid silver bridal stand and a fine set. of chafing dishes from the officers of the bridegrooms depot. 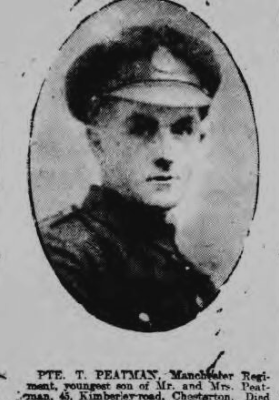