The outbreak appears to have been discovered by the daughter of Mr. George Frederick Harrison, coach builder, of 31, Gwydir-street. Miss Harrison aroused her father and informed him that the premises of Mr. Ambrose were on fire. These were premises at 21, Gwydir- street, belonging Mr. Harry Edward Ambrose, of Radnor House, Rustat-road, Cherry Hinton road, builder. Mr Harritton at once got up and raised the alarm at the Central Fire Station by breaking the glass of the fire alarm close by.

The call was received at tho Fire Station at 2.7. The motor escape was on its way one and half minutes later, under Foreman Brookman and the steamer smartly followed, leaving at 2.11. Meanwhile P.C. Arthur Noble, when leaving Parker’s Piece coming off duty, noticed a bright glow suddenly appear above the houses in the direction of  Sturton-street, and realising that a fire had broken out, hurried to the police station. A motor car belonging to Special Constable Webb was drawn up outside the police station, and the owner drove P.S. Winter and P.S. F.J. Lilley to the scene of the outbreak. On reaching Gwydir-street the officers found that the fire had originated in the paint shop of the builder’s yard. They examined the premises, and found that the fire had got a strong hold, and the burning building was in dangerous proximity to several houses, they hurriedly aroused all the residents in the neighbourhood. Then the motor escape and the fire engine arrived, and the firemen quickly and efficiently got to work with the steamer, two hydrants being used, and an excellent pressure of water being directed on to the flames.

The firemen were soon joined by Capt. Greef and Lieuts. Diver and Sanderson. The building was well ablaze from end to end when the firemen arrived, and the chief task of the Brigade was to prevent the flames from spreading to a pile of timber in the yard, which took a lot of watching, and to the adjacent property, which, happily, was separated from the burning building gardens. In this task they succeeded admirably, though so fierce was the blaze at the paint shop that more than an hour elapsed before the brigade got the fire properly underhand.

The building, where the fire started, was completely destroyed. It had been a two-storeyed erection, consisting of a basement and first floor, and in dimensions 150 ft. by 50ft. The building was used as a paint shop, a joiners’ work shop, stores, machinery mill, and offices. All the contents of the place were ruined, including a quantity of workmen’s tools left in the building. A number of books, etc., and the safe were removed from the offices. Also destroyed the fire were the following adjoining premises: Joiner’s shop, including tools, belonging to Mr. George Frederick Harrison, 31 Gwydir-street, and valued at about £10 (not insured); a carpenter’s shed and tools, property of Mr. William Henry North. 33, Gwydir-street, of lesser value (not insured); a fowl shed belonging Mr. H. Edward Miller, of 29, Gwydir-street; and fowl shed belonging to Mr. Wm.. Burling, 27, Gwydir-street.

The origin of the fire is a mystery. Mr. Herbert Arthur Tyrrell, of 38 Gwydir-street, a painter employed by Mr. Ambrose, locked the building about 5.30 p.m. on Saturday. At that time everything appeared all right. The only light used in the place during the day was a gas ring for the purpose of melting size, but this was some distance from where the flames were first seen.

For some months past Mr. Ambrose’s men have been engaged on military work, and have been working late each night as well as on Sundays. The damage is estimated at, approximately, £2,000, and, we understand,  is only partly covered by insurance.

Some 20 firemen worked to extinguish the fire, and the police, including several special constables, rendered useful service, under Inspector Baker.  Great assistance was also rendered by the 3rd Company, 6th Battalion, of R.W.F. THANKS TO HELPERS. 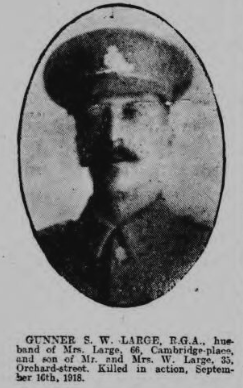