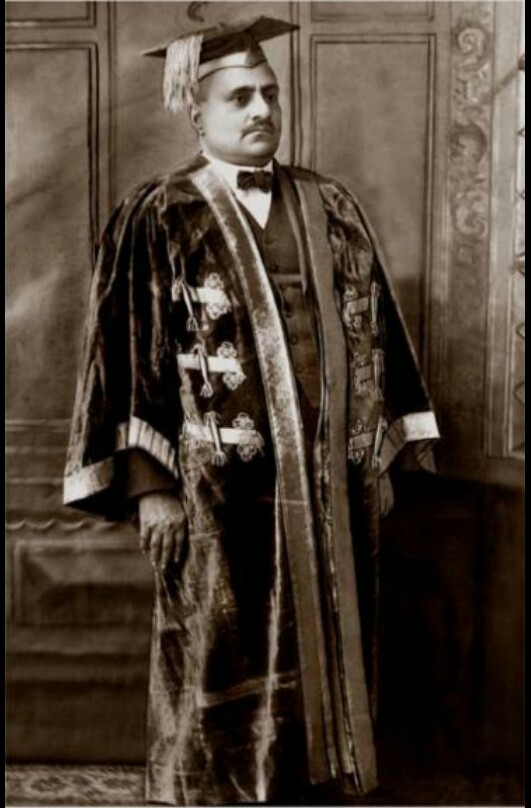 Distinguished lawyer, jurist, educationalist, social reformer, poet and novelist, Sir Hari Singh Gour was a student at Downing College and was subject to considerable racism throughout his life.

Hari Singh Gour was born on 26 November 1870 to a poor family near Sagar, in the state of Madhya Pradesh. The family had to be supported by Hari Singh’s eldest brother who provided an allowance of 50 rupees per month. Hari Singh’s father was a carpenter,and a farmer but the young boy did not have an interest in this trade. At the age of ten, Hari Singh won a scholarship of two rupees per month which enabled him to attend a night school in Sagar. Later, with the help of another scholarship he went to Jabalpur to undertake further studies. Mathematics was his favourite subject and for this he received a special prize. In Jabalpur, he went for his matriculation but he failed in the first time as he was deeply disturbed as someone stole his gold ring which he brought by saving 10 rupees from all his scholarships. But the second time he passed out with good marks. He passed his Intermediate examination from Hislop College, Nagpur, a free church institution, standing first in the whole province.

When he was 18 years old, Hari Singh Gour went to the University of Cambridge in England where he took Moral Sciences Tripos and Law Tripos. Unfortunately, the young Hari Singh experienced a great deal of racism as a student and throughout his life. He participated in a mathematics competition, of which the results were not declared. Some years after obtaining his LL.D. he learned that the scholarship which the competition awarded was not given to foreigners, especially “blacks,” as Indians were referred to by the British. Since Hari Singh came first in the competition, the scholarship ended up not being awarded to any one. He faced similar treatment in other situations and academic competitions, however he never let this unfair treatment by the British discourage him. Instead, he began to write poetry. In fact, while in England he came to be known in literary circles as a promising poet, becoming acquainted with the likes of George Bernard Shaw. He wrote a book of poetry entitled Stepping Westward and Other Poems due to which he became somewhat of a celebrity and was thereby selected a Member of the Royal Society of Literature.

In the Central Legislative Assembly in 1921, Gour denounced the sequestration and suppression of women. He was also a great social reformer and was successful in getting an act passed to enable women to be enrolled as lawyers, while his Civil Marriage Bill of 1923 showed him to be a reformer thinking ahead of his time. Gour was not only a progressive scholar; he demonstrated such forward thinking in his personal life as well. He married Olivia D/o Balwant Singh of Bhandara. Hari Singh Gour was knighted in 1925. The first bill for the abolition of untouchability was introduced in 1921 by Hari Singh Gour. 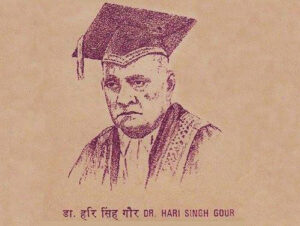 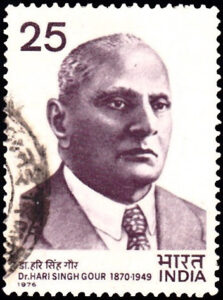 He accomplished much, overcoming initial poverty and lasting discrimination. For example, in 1941 Gour was turned away by a hotel in England on account of his race. The Indian Posts and Telegraphs Department issued a commemorative stamp of Dr. Hari Singh Gour on 26 November 1976. Madhya Pradesh Council of science and technology provide Dr. Hari Singh Gour state award in the field of social science.

Books: The Spirit of Buddhism: Being an Examination, Analytical, Explanatory and Critical of the Life of the Founder of Buddhism, His Religion and Philosophy, Its Influence Upon Other Religions, Philosophies and on the Ancient and Modern Social and Ethical Systems, Social Upheavals and Revolutionary Movements

‘I was a student, and the man who had founded the university, Harisingh Gaur, was still the vice-chancellor. We became friends, because I used to go for a morning walk on a lonely street early in the morning before sunrise and he also used to go on the same street, alone. We were the only persons, so naturally…it started with saying “good morning” to each other. By and by we started walking together. He started asking about me, what subject I was studying, what I was doing, and slowly, slowly the distance of age disappeared. He started inviting me for tea after the walk. And he became interested in my ideology, because whenever I saw that he was saying something which I could not accept I simply rejected it and produced every possible argument against it. He loved it…’ 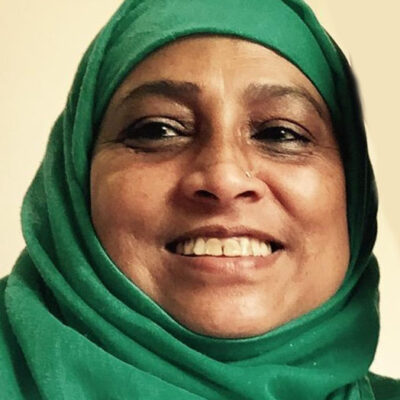 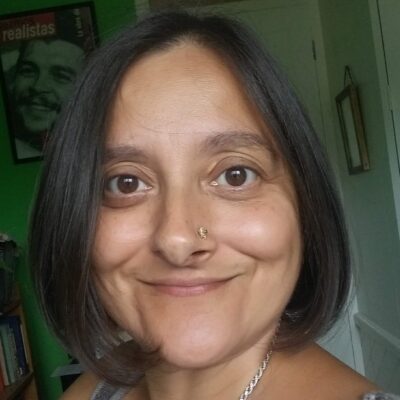