The Family of a Railway Porter 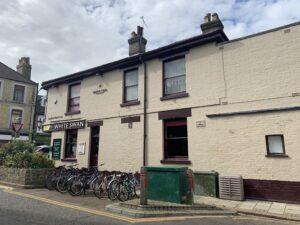 In 1881 Frederick and Mary Williams are living here.  They are both 36 and were born in London.  Frederick works for the Great Eastern Railway as a pass guard.  The couple have two young daughters, Louisa aged 7 and Florence aged 3.  Both children were born in Cambridgeshire.

In 1891, number 1 Kingston Street was home to William Norton, a 46 year old railway porter from Suffolk. Alongside him is his wife, Martha Norton, a 39 year old from Luton with no listed occupation, They have two daughters, 14 year old Ada and 9 year old Mabel, who is listed as a scholar, which was fairly uncommon for the time. Also present is William Norton’s sister Rebecca Carter, who works as a caretaker.

By 1901, the Norton family are still the residents. William Norton no longer works as a railway porter; instead he has turned his hand to being a labourer for a local carpenters. Ada, now 24, works as a Cashier at a Grocers, and Mabel, now 19, works as a dressmaker.