The History of the Talbot Family

Head of household in 1911 is Herbert George Talbot.  Herbert is 28 years old and works as a stereotyper for a printer. He is the son of a railway guard from Broad Street.

Hebert married Elizabeth Hardy in 1907.  Elizabeth is 29 years old and was born in Longstowe.  The couple have a baby daughter called Doris May.

Herbert shows up in the Red Cross Volunteer Aid Detachment records for World War 1.  He joined up in October 1914 as a Private.  His duties are recorded as ‘air raid, hospital, convoy’.  At the end of the war his rank is recorded as Quarter Master and his total hours worked was 2,659.

The Cambridge Independent Press for the 1st February 1918 listed all the men who were having their exemption from the War certificates reviewed.  All the cases relating to newspapers and printing were heard together and Herbert was recorded as working for the University Press.  His name came up again in October 1918, and this time his job description was detailed, “engaged in preparing stereotype plates in the production of educational and scientific books.” It went on to say “In the case of Talbot exemption was conditional on remaining in the V.A.D.”

The Cambridge Electoral Registers show Herbert and Elizabeth living at 1 Oswald Terrace until 1955 when they move to 24 Beche Road to live with their daughter Dorothy and her husband Albert Cable Harper. 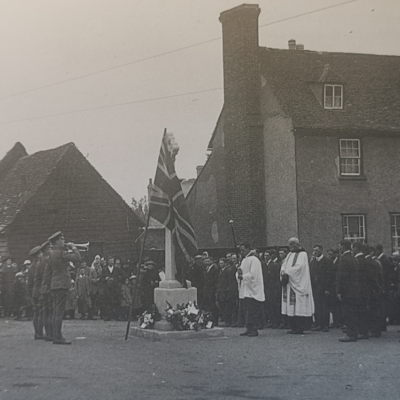