The History of the Harradine Family 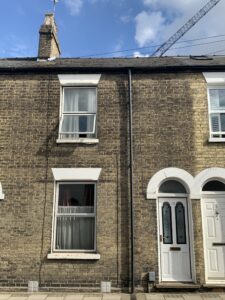 John and Eliza Harradine live at number 10 in 1881.  He is 46 and an engine driver from Trumpington, and Eliza is 49 and was born in Cambridge.  They have one grown up son and three younger children.  George is 24 and a railway servant. Arthur, 12, and Bertha, 6, both go to school.  Henry is the youngest and just two years old.

In 1891, 10 Kingston Street is still the home of the Harradine family. 54 year old John now works as a Railway Engine Fitter, he lives with his 51 year old wife Eliza and their two children Bertha, 16, and Henry, 12, both of whom are listed as ‘scholars’ meaning they are at school.

By 1901, John Harradine, now 66, has since retired; Eliza, Bertha and Henry are still present, Henry now working as a Lithographer (a different method of printing).

In 1911, Number 10 remains the home of the Harradine family. However, neither John or  Eliza are present – instead their eldest son George Harradine, now a 54 year old Engine Fitter, lives here with his wife Mary Harradine, a 53 year old from Steeple Morden. Mary’s mother, 90 year old Widow Margaret Thewbald lives with them alongside their 3 children: Blanche, aged 22, a Tailoress; Frank, aged 20, a Baker; and Lilly, aged 10, in school.

The Electoral Registers show that Harradines live at 10 Kingston Street from 1880 to at least 1966.