A Railway Guard & a railway porter 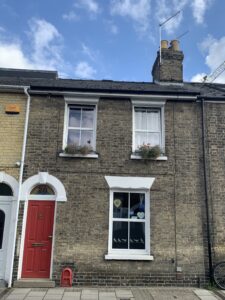 Head of Household is Thomas Tyler, a 31 year old railway porter who was born in Hedingham, Essex.  He is married to Lavinia, 24, from Earith.  The couple have two young children: Arthur, who is two, and eight month old Edith.  Their niece Emily Wilder, 13, is living with them.

In 1891, 20 Kingston Street was home to the Lofts family. Harry Lofts, a 29 year old Railway Guard from Suffolk is married to 28 year old Elizabeth Lofts from London. They had 3 daughters: 4 year old Jessie, 1 year old Gertrude, and newly born Lily. In order to supplement their income to support their household they have taken on a lodger, Walter Westley, a 21 year old Acting Railway Guard from Suffolk, suggesting he knows Harry Lofts from their work.

In 1901, 20 Kingston Street is home the Wilsons. Martha Wilson, a 52 year old from Fulbourn, is married to 66 year old Henry Wilson, a Railway Porter from Branston, in Lincolnshire. They live with their daughter Louisa Rachael Dolton, a 22 year old Dressmaker.

By 1911, 20 Kingston Street is home to the Beaumont family. Richard Beaumont, a 54 year old Brewer’s carman from Comberton, is married to Ellen Beaumont, a 51 year old also from Comberton. They have one daughter, 22 year old Minnie Beaumont. Also living with them is their relative, listed as a boarder, 29 year old William Beaumont, a Painter from Newmarket. They also have one other boarder, 31 year old Naylor Thorp, a Pork Butcher’s assistant from Halifax.