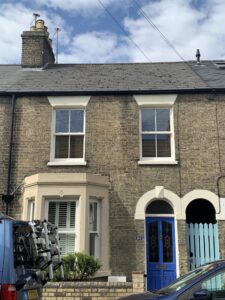 The Peacocks are living at 21 Kingston Street in 1881.  Samuel Peacock is 57 and an accountant who was born in Cambridge.  His wife is Mary, 58, from Newport in Essex. Their daughter Agnes is living with them.  She is 26 and was also born in Newport.

In 1891, 21 Kingston Street is home to the Apthorpe family. William Apthorpe is a 28 year old Post Office Clerk; he is married to 29 year old Mary. They have two children: 2 year old Reginald, and baby Edith.

By 1901, the Apthorpe family has grown. William, now 38, still works as a Post Office Clerk. Mary is now 39. Reginald is now 12 and Edith 10; they have since had another son, 7 year old Leonard, and two daughters, 5 year old Clara and 2 year old Elsie.

By 1911, the Apthorpes are still the residents at number 21. William, now 48, still works as a Post Office Clerk. Mary is now 49, Reginald, now 22, works as a Tailor; Jessie, aged 20, works as a Dressmaker; Leonard, aged 17, is a Clerk; Clara, aged 15, is a dressmaker’s apprentice (likely her sister’s); and Elise May, now 12, is still at school.  William and Mary have since had two more children: Sidney William, aged 9, and Frederick Thomas, aged 7, both of whom are at school.