An Engine Driver & a Watchmaker 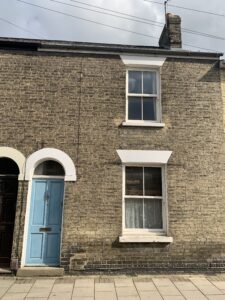 Head of household is James Ringe, a 32 year old engine driver, and his wife Susannah.  The couple are from Essex.  They have two children, Charles, 8, a school boy, and 2 year old Alice.  George Dutton is lodging with them, he is 20 and a booking clerk for the London and North Western Railway. The family move to 16 Kingston Street.

In 1891, 24 Kingston Street was home to 83 year old Sarah Starkey, single and ‘living on her own means’. Also living here is Mary Tanner, a 79 year old Widow.

By 1901, Sarah Starkey is still living at number 24, though she now lives with her great-nephew George Kirkup and his large family. George, a 32 year old Watchmaker, is married to Florence, aged 33. They have 4 daughters: Mabel, aged 10; Annie, aged 8; Winifred, aged 5; and newborn Victoria. Also living with them is Charlotte Churchman, a Monthly Nurse (someone who assisted women during the first month after giving birth), aged 70, a Widow.

By 1911, Number 24 is home to Augusta Annie Proctor, a 33 year old from Thurvaston, Derbyshire. She is married to Thomas Barnes Proctor, a 32 year old Police Constable from Syston, Lincolnshire. They have one son, 1 year old Arthur.