The Family of a Bricklayer 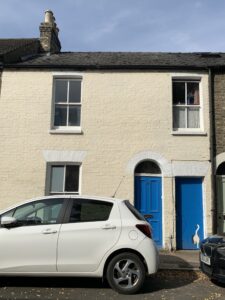 Head of household in 1881 is 41 year old bricklayer Daniel Johnson.  He is married to 48 year old Harriet (nee Lowe).  Daniel was born in Melbourn and Harriet is from Fulbourn.  Daniel can be found on the electoral rolls living at this property from 1878.  He and his family have moved here from 17 City Road.

The couple have three of their children with them in 1881.  Lizzie Charlotte is 18 and working as a milliner.  Agnes Ann is 16 and a ‘mother’s help’.  Arthur Charles is 9 and still at school.

In 1861 the couple appears on the census living on Ferry Path.  At that time they have twins, Jane Harriet and John Edward.  The twins are three years old, despite Daniel and Harriet marrying in 1860.  There is also a nine month old son called George Samuel.  The twins cannot be located in the records apart from this one appearance.

George is with his parents in 1871.  By 1888 he is working as a Policeman in Leeds and has married Isabella Clark. By 1901 the couple were living at 21 Covent Garden with their daughter Laura.  George is now a stone mason.  George and Isabella are buried in Mill Road Cemetery.

On the 1891 Census Agnes still has no occupation (she is now 25), and is probably still her mother’s help.  Arthur is now 19 years old and going by “Charles”.  He is a printer’s clerk.

In 1901 Daniel and Harriet have a boarder called Rebecca Mortimer.  She is 43 and was born in Cambridge.

Widower Daniel Johnson can be found as an inmate at the Workshouse on the 1911 census.  He died later that year.

Robert William Harper.  He is a butcher’s shop manager on the 1939 Register.

Alice and Ethel are sisters.  In 1891 they can  be found living at 29 Sturton Street.  Alice married Robert in, whilst Ethel stayed with their mother Sarah at 64 Sturton Street until she died in 1929.

The Electoral register for 25 Sturton Street shows that Ethel stays here until 1932.