A Carpenter & a Charwoman 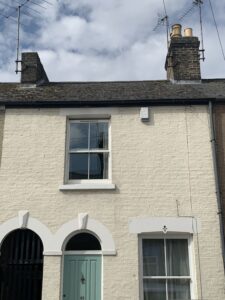 Alfred and Ann Brockett live here in 1881.  Alfred is a 60 year old builder originally from Guilden Morden. Ann is 58 and was born in Steeple Morden.  Their 6 year old granddaughter, Jane Spicer, lives with them, she’s a school child and was born in London.

The Brocketts have moved to 5 Sturton Street by 1891.

In 1891, 55 Kingston Street was home to Luisa Berry, a 22 year old from London. She is married to Thomas Berry, aged 25, working as a Carpenter and Joiner. They have one son, 3 year old Thomas. Also living with them is a lodger, 23 year old Robert Norman, a hairdresser from Bedfordshire.

By 1901, 55 Kingston Street is home to the Reed family. Henry Reed, aged 67, is married to Mary Reed, also 67, who works as a Charwoman. They have their 11 year old grandson living with them, George Reed, alongside a boarder, 35 year old Arthur Miller, a bricklayer;s labourer.

On the 5th September 1902 the Cambridge Daily News reported on how Cambridge celebrated the Coronation of King Edward VII.  In particular they described the “Old People’s Tent”, which contained “a large number of people who were present at the Cambridge festivites on the occasion of the late Queen’s Coronation”.  The article then went on to list the names, ages and addresses of the old people who were present.  This list includes “Mrs Read, 55 Kingston Street (69), Mr. Henry Read, 55 Kingston Street (69)”.  Another guest in the Old People’s Tent was Alfred Brockett, who lived in this house in 1881.