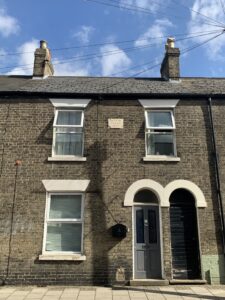 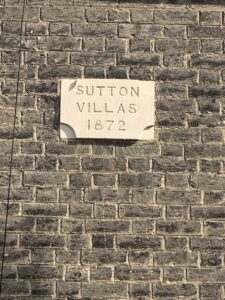 The  Few family live here in 1881.  Peter Few is a 40 year old railway engine driver who was born in Willingham.  He is married to Jemima, 37, also from Willingham.  Their eldest two children were also born in Willingham.  Florence is 20 and a dressmaker, Hezekiah is 16 and a solicitor’s general clerk.  Younger children Lydia (11) and Bertie (6) are both school children.  The youngest child is 3 year old Gerard.  All the younger Few children were born in Cambridge.

Sarah A C Few, Peter’s niece, is also living with the family.  She is a dressmaker and was also born in Willingham.

Some of the Fews still live here in 1891.  Records show that Peter Few died in 1883.  Jemima remarried in 1886, she lives in Battersea and her new husband is a coachman.

Lydia Few is now 21 and has become head of household.  She is a dressmaker and lives here with her younger brothers, Bertie Few, 16, a Carpenter, and Peter Gerard Few, 12, a scholar.