A Boiler Maker and his Family 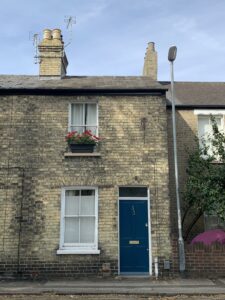 Head of household in 1891 is Charles Henry Ayres, a 24 year old whitesmith.  He grew up at 82 Sturton Street where his father also worked as a whitesmith.

He married Georgiana Faulkner in 1888.  The couple now have a 1 month old daughter named Gertrude Florence.

Head of household in 1901 is George Watkins, a 38 year old boiler maker’s assistant from Cambridge. He is married to Rosa, aged 28, from Fordham.

In 1902 the couple had a daughter who the named Nellie Rosa.

The 1911 census records that George is now a Tuber in the Locomotive Department.  Nellie is now 9.

George joined the National Union Of Railwaymen in 1917. He is still employed as a tuber.

Between February 1931 and July 1934 “Mrs. Watkins, 33 Sturton Street” appears frequently in the Saffron Walden Weekly News.  Addenbrooke’s Hospital is collecting silver paper, and there is a section in newpaper that lists everyone who has gifted silver paper that week. In The Politics of Hospital Provision in Early Twentieth-Century Britain, Brian M Doyle (writing about the 1920s and 30s) “Mass collection campaigns were also instituted, especially for eggs and silver paper, bringing in a wide range of volunteers, mobilizing supporters … and facilitating support from women and children.”  He continues “Equally important in terms of civic mobilisation, although of considerably less value financially, was the collection of silver paper which took off in the mid-1920s. This activity was well-suited to mass involvement – it was ubiquitous, cost nothing and lent itself to communal efforts”  Rosa was clearly doing her bit for the community.

The couple appear together on the 1939 register still living at 33 Sturton Street, and George is still on the electoral registers here until 1945.