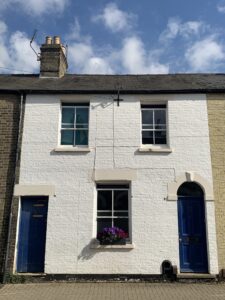 Head of household is James Hines, a 35 year old railway servant from Cherry Hinton. He is married to Hannah, 40, born in Lydd St Mary’s, Lincolnshire.  The couple have four children: Phoebe (9), Robert (6), William (4) and Albert (2).

Philip P Davison, a 30 year old wood carver, lives here with his wife Eliza, 29, and their four year old son John.  All the Davisons were born in London.

In 1891, 42 Kingston Street is home to the Reader family. Selina Reader, a 42 year old, is married to David Reader, a 52 year old, working as a Tram Car Driver on the now closed Cambridge Tramway. They live with their 15 year old daughter Laurie Reader, whose job as a Mantle Maker meant she manufactured mantles for gas lamps. David Reader’s 85 year old father Thomas Reader is also living with them, listed as ‘living on his own means.’ They have taken on a lodger to supplement their income, 19 year old George Brown, a Baker.

In 1901, 42 Kingston Street is home to the Harradine family. Mary Harradine, a 43 year old from Steeple Morden, is married to George Harradine, a 44 year old working as a Railway Engine Fitter. They have four children: Blanche, aged 12; Frank, aged 10; Rose, aged 5; and Lilley, aged 1. Also living with them is Mary’s mother Margaret Theobald, an 80 year old Widow.

On the 5th September 1902 the Cambridge Daily News reported on how Cambridge celebrated the Coronation of King Edward VII.  In particular they described the “Old People’s Tent”, which contained “a large number of people who were present at the Cambridge festivites on the occasion of the late Queen’s Coronation”.  The article then went on to list the names, ages and addresses of the old people who were present.  This list includes “Mrs. Margaret Theobald, Kingston Street (83)”.

In 1911, 42 Kingston Street is home to Annie Hunn, a 52 year old Widow from Charlton in Kent. She lives with her daughter Nellie, a 22 year old Tailor; her son John, a 17 year old Blacksmiths Apprentice; her 10 year old adopted son Albert Bale; and 10 year old foster child Gladys Peacock, both of whom are in school. Also living with her is a boarder, Wallace Foulger, a 15 year old from London, working as a Whitesmith Apprentice, so likely a friend of John Hunn.