A Primitive Methodist Minister, a chimney sweep, and a college servant 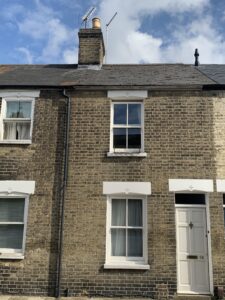 In 1891, 56 Kingston Street was home to the Smith family. Charles Smith, a 35 year old Chimney Sweep, is married to 27 year old Florence. They have three children. Their eldest, Edgar Smith, aged 5, is in school. He is listed as born in Northumberland, which suggests they lived in Northumberland at the time, though both Charles and Florence hail from Cambridgeshire. Edgar’s sisters, Marion, aged 2, and Gladys, not yet a year old, are both too young to go to school.

By 1911, 56 Kingston Street is home to George Allen, a 43 year old College Servant. He is married to Martha Allen, aged 43, and they have a daughter, Annie, aged 8, who is in school. Also present is a boarder, Martha Wilson Runham, a 77 year old widow from Chesterton.