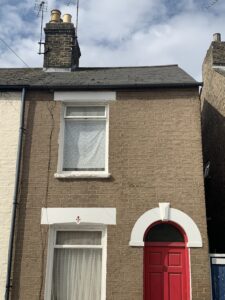 Joseph C Townsend, a 25 year old railway guard from Egham, Surrey, lives here in 1881.  The Census records that he is married, but his wife was not at home on Census night.

In 1891, 57 Kingston Street is home to Kate Caldecoat, aged 23, who is married to Edward Caldecoat, aged 25, a boot and shoe maker. They have a daughter, 2 year old Elizabeth. To supplement their income and help pay for their rent and food, they have taken on a boarder in the form of 25 year old Edward Forsdyke, a grocer’s assistant.

By 1901, 57 Kingston Street is home to the Dure family. Emma Dure, a 50 year old from Ickleton, is married to Tom Dure, a 51 year old Plate Layer (railway tracklayer) Foreman. They have four children living with them: Margaret, aged 15, Florence, aged 14, Samuel, aged 11, and Charles, aged 9, alongside Tom and Emma’s grandson Harry Stibbards, aged 2.

By 1911, Number 57 is home to the Lowe family. Caroline Lowe, aged 31, from Wimpole, is married to Robert Lowe, a 37 year old hairdresser from Girton. They have a son, 4 year old John Lowe.