The History of the Woodman / Knightley Family 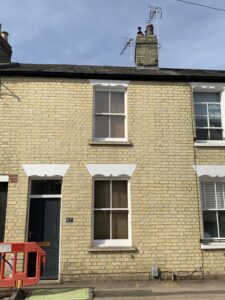 Head of household in 1881 is A. George Woodman a 39 year old carpenter who was born in Clavering in Essex.  He is married to 37 year old Roberta from Upminster in Essex. The couple have seven children, the eldest four were all born in Clavering, the younger three in Cambridge.

The family was living at 10 Eden Place in 1871 and the census enumerator has helpfully noted that the children born in Cambridge were born in the parish of St. Andrew the Less.

George doesn’t have an “A” before his name on this census, but there is no sign of a “George Woodman” on the 1861 Census.  There is, however, a marriage in Clavering between “Alfred George Knightley” and “Roberta Susanna Halls” in 1864.  This is followed by a baptism of a “Martha Eliza Knightley” to this couple.  At some point between the 1864 marriage and the 1871 Census, George dropped his “Alfred”, changed the families surname to Woodman (because he is a carpenter?) and moved to Cambridge.

On the 22nd November 1882 Martin enlisted into the Royal Marine Artillery, using the name of Knightley.  Martin is 5 foot 7 &three quarter inches tall, has a fresh complexion with dark brown hair and brown eyes.  He served, with very good conduct, until September 1890, when he died.  It is unclear how he died, his service record shows that he was serving aboard the vessel Collingwood when he died.

In April 1887 Martha (under the surname of Knightley) married Edmund John Haslop in Rickmansworth.  Edmund is a railway clerk from Trumpington.  The couple live in Irthlingborough, Northamptonshire.

Mary Ann married William Arthur Thompson in 1888.  By 1891 the couple are living at 2 York Terrace with their two baby daughters, Margaret and Matilda.  Mary is continuing the family tradition of babies with M names!

In 1891 Margaret is working as a servant at Camden House on Oxford Road.  She married Arthur Henry Fuller in 1895 and they moved to Thriplow.

Matilda married John Shore, an engine pattern maker, in 1897.  In 1901 the couple are living in York with their three children.  On the night of the census Margaret Thompson (now aged 12) is visiting them.

On the 1891 census the family that remains at Sturton Street are still going by “Woodman”, despite the children who have left home reverting to “Knightley”.

Maud is now 11, and there are three new sons, surprisingly with names that start with letters other than M!  Ernest George is 9, Edward Ralph is 7 and Paul Harry is 5.  The births of all the children have been registered as Knightley.

Edward became a college porter and joined the Royal Artillery in 1904.  He left in 1907 with a view to joining the Royal Canadian Artillery.

By 1901 the family are living at 64 Sedgwick Street and are now using the name Knightley again.

May Stubbs, 8, b. Cambridge