A Bootmaker & a Laundress 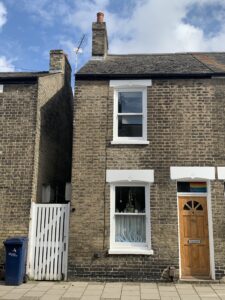 Alfred and Ann Quinney live here in 1881. Alfred is a 29 year old railway fireman, Ann is 30, they are both from Essex.  The couple have a one year old daughter called Elizabeth.

In 1891, living in 60 Kingston Street is Susan Beamiss, a 33 year old from Lincolnshire. She is married to William, a 31 year old Bootmaker. They have a 10 year old daughter, Hilda Beamiss, who is in education.

By 1901, 60 Kingston Street is home to Rebecca Kefford, a 58 year old Widow from Madingley, who works as a Laundress. She lives with her son, 33 year old Walter William, a cab driver; and a boarder, David Leech, a 34 year old Shop Assistant from Withersfield.

By 1911, Number 60 is home to the Cross family. Elizabeth Cross, aged 64, from Lakenheath, is married to Robert Cross, a 68 year old invalid from Prickwillow, near Ely. They live with their son George Cross, a 36 year old Labourer, and their younger son Claude Cross, an 11 year old Errand Boy. George has two children, Harry, aged 8, and Nellie, aged 7, both of whom are in school.