A Bootmaker & a Coppersmith 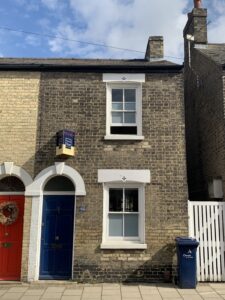 Head of household is William Beamiss, a 24 year old bootmaker, originally from Ely.  He is married to Susan, 28, who was born in Lincolnshire.  The couple have a four month old daughter called Hilda.

62 Kingston Street was home to 70 year old Elizabeth Jones, who was married to 66 year old Edwin Jones, who worked as a coppersmith, and was still working despite his age.

By 1901, 62 Kingston Street was home to retired couple Thomas and Sarah Naylor. They are listed as ‘living on own means’. Thomas, aged 67, and Sarah, aged 65, both hail from Cambridge.

By 1911, Number 62 is home to Annie Simmons, a 38 year old, married to Arthur Simmonds, a 31 year old Railway Fireman (also sometimes called a stoker). They have one son living with them, 18 year old Percy Knightley, alongside Arthur’s mother, Isabella Speechley, a 76 year old Widow from Kingston.