A Family of Tailors 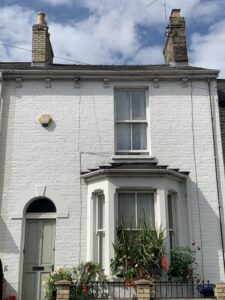 William W Smith,  a 57-year-old agent from Cambridge, lives here with his wife Jane.  The couple have a boarder living with them.  Frederick Ellis is 25 and a boiler maker from London.

In 1891, 7 Kingston Street was home to the Lawrence family. 56 year old Ann Lawrence, from Northamptonshire, and her 54 year old husband Edward, from Huntingdonshire, who worked as a Tailor, lived with three of their children. The youngest, 18 year old Alice, and her older sister 21 year old Jane,  are both unemployed. The eldest, 34 year old George, worked as a Tailor, and so we can assume he worked alongside his father.

In 1901, the Lawrence family remain at number 7, though Edward Lawrence has now passed, leaving Ann as a Widow. George, her son, is still present, now aged 44, unmarried, still working as a Tailor. Alice has since married, now Alice Gerbel, and is there with her daughter Gladys, aged 6. However, as Gladys’s birth place is listed as Yarmouth, on the Isle of Wight, and Alice’s husband is not present, it is likely Alice is visiting her mother over the census period rather than still living here.