A Widow & a House Painter 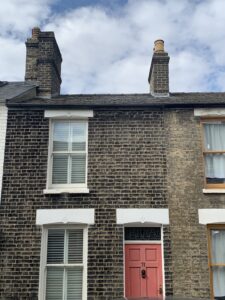 In 1891, 71 Kingston Street is the home of 59 year old Caroline Russell from Norfolk. She is listed as married though her husband is not home on census night. If we look to the 1881 census, Caroline is living in Haddenham with her husband Richard Russell, aged 47 at the time, working as an agricultural labourer. Caroline, aged 48 at the time, is listed as a Dressmaker. Looking further, Richard Russell, born 1833 in Haddenham, is listed on a death certificate in 1890, buried in Haddenham the same year. Caroline is, in fact, a widow by the time she lives in Cambridge in 1891.

In 1901, 71 Kingston Street is home to the Ruse family. Bessie Ruse, aged 26, from Thornton, Suffolk, is married to Frank Ruse, a 28 year old House Painter. They have one child, a newborn daughter, who is of yet unnamed. Also living with them is Frank’s brother, 21 year old Octavius Walter Ruse, a harness maker.

By 1911, The unnamed newborn daughter has since been called Doris, and is now 10 years old and in school. Bessie is now 36, and Frank, now 38, has become a Plumber as well as being a decorator.