The Family of a Horsekeeper 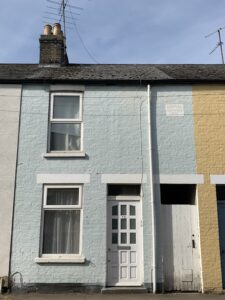 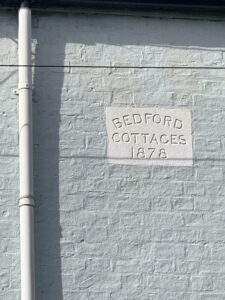 The Brown family are registered at this address until 1911.

Head of household in 1881 is John Brown, a 34 year old horsekeeper for the Great Eastern Railway.  John was born in Broomfield, Essex.  He is married to Maria, 30, from Halbridge, Essex.

The couple have four children.  Phobe is 7 and was born in Halbridge like her mother.  Florence Maria is 6 and Emma is 3, both girls were born in Bethnal Green.  George Thomas is 11 months old and was born in St Andrew the Less parish, Cambridge.

Phoebe, Florence and another daughter named Alice were all baptised at St. Jude’s in Bethnal Green on the 21st January 1877.  John gives his job as ‘porter’.

John and Maria now have four more children.  Harry is 9, Agnes is 7, William is 4 and James is 1.

In January 1899 George joined the 7th Hussars (Hussars of the Line), he was 18 year old and described as brown haired, grey eyed with a fresh complexion.  He had the word “Girl” tattooed on his right forearm.  George served with them during the Second Boer War (in 1901/02) and was awarded the Queen’s South Africa Medal (with clasps for Cape Colony, Orange Free State & Transvaal) and King’s South Africa Medal.  He was in South Africa until December 1905.

He transferred to the Army Reserve in January 1906, and was a reserve for the next eight years.  On the 5th August 1914 he was mobilised with the Royal Horse Guards as a Trooper and was part of the British Expeditionary Force.  He was discharged in Jaunary 1916, having been “invalided home for rheumatism to Charing Cross Hospital – subsequently spent 3 months at 1st Eastern General Hospital.”  The cause of the rheumatism was given as “exposure in the trenches”.

The service papers record that he married Alice Lehman in November 1906 and their home was at 23 Kingston Street.  There were four children, Agnes, Nellie, Gladys and Ernest.

The property does not appear on the 1911 Census

“What caused John Nicholls, a 71 year old bricklayer, to fall heavily and receive a fatal injury while cycling down the hill at Coldham’s Lane on Thursday morning?” The question remained unanswered and the Coroner decided that it was an “accidental death”, remarking “Whether men of that age ought to ride bicylces is a matter entirely for them.”

“Charles Lowings, wireless assembler, of 66 Sturton Street, identified deceased as his father-in-law who resided at 73 Sturton Street.  Although 71 years of age, he was an active man and worked as a bricklayer.  He was used to rising a bicycle, his machine being in good order.”