The Family of a Laundress 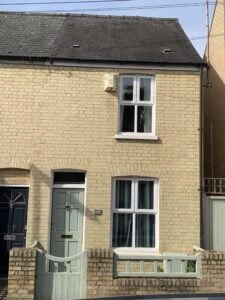 Head of household in 1881 is 38 year old Charles Youngs from Witham in Essex.  Charles works as a railway guard for the Great Eastern Railway and is married to Susan.  Susan is 34 and was born in Royston.

The couple have a 14 year old son, Charles, who works as a cook for one of the colleges.  He was born in Ely.

The Youngs have moved next door to 77 Sturton Street by 1891.

Head of household in 1891 is Mary Ann Howlett (nee Aves), a 47 year old widow who was born in Bottisham, Cambridgeshire.  Mary works as a laundress. Mary’s husband William was a bricklayer, he died in Bottisham in 1883.

She is living with her sister-in-law, Sarah Howlett (nee Ransom).  Sarah is 35, also a widow and works as a charwoman.  Her husband Richard was a bricklayer like his brother William.  He died in Bottisham in 1887.

Mary has three children, William John is 14 and works as an errand boy.  Ethel is 11 and Charles is a 9, they are both schoolchildren.  Sarah has two of her children living with her, Richard is 9 and Ellen Sarah is 5.

The final member of the household is Sarah Hunt.  She is 70 and recorded as Mary’s widowed aunt.

Sarah and her children move to Halifax and can be found on the 1901 census working as machne operators and brace weavers in a worsted mill.

In 1901 Mary Ann continues to work as a laundress, and lives here with her sons William and Charles.  Now 24, William is a bricklayer’s labourer.  Charles is 19 and a baker’s assistant.

Ethel cannot be located on the 1901 Census, but in 1911 she is working as a cook for a corn merchant in Melbourn.

In 1902 William married Mary Jane Beard.  The couple can be found on the 1911 census living at 19 York Terrace.  They have one child, a nine year old daughter named Annie Elizabeth.

Charles married Edith Rose Beard (mary Jane’s sister) in 1909 and can be found on the 1911 living at 13 Vicarage Terrace, where he works as a journeyman baker.  The couple have a baby called Elizabeth.  Edith died in 1916.  Charles remarried in 1922 to Elizabeth Strangward.  In 1939 the couple are living at the School House on Norfolk Street.  Charles is a baker.