The History of the Wagstaff Family 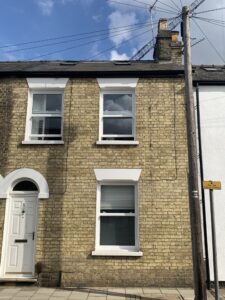 William and Eliza Wagstaff live here in 1881.  William is 46 and an engine driver for the Great Eastern Railway.  He was born in Colmsworth, Bedfordshire.  Ellen is 44 and from Cambridge.  The couple have five children.  Frederick is 11, Maud Elizabeth is 9, William is 7 and Sophia is 4.  The four eldest attend school.  The youngest is baby Gertrude who is 1.

In 1891, 8 Kingston Street is still home to the Wagstaff family. 56 year old William is now working as a Railway Engine Fitter. His wife, Eliza, 53, has no occupation listed. Two of their children are living with them, 19 year old Maud is working as a dressmaker, and 11 year old Gertrude, is at school.

By 1901, William, now 66, and Eliza, now 63, continue to live here; though their children have now left home. In the last ten years William has become a Railway Engine Driver again, and then retired.

By 1911, the Wagstaffs have moved, and number 8 is now home to the Rowlinson family. Elizabeth Ann Rowlinson, a 48 year old Widow from Pampisford, works as a dressmaker. She lives with her son Percy, aged 19, working as a Grocer’s assistant. Also present is Elizabeth’s sister, Margeret Rowlinson, aged 50, also from Pampisford. They have one boarder, 19 year old Reginald Russell from Little London, Norfolk. He works as an Engine Cleaner.