An Electrics Worker and a Bricklayer 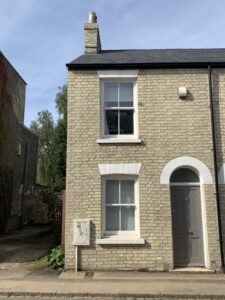 Head of household in 1911 is Harry Boreham, a 32 year old brewer’s labourer.  He grew up on Sturton Street, most recently at number 83 where he lived before his marriage in 1902.  His wife is 30 year old Kate (nee Bailey), who was born in Fen Ditton.  Kate is the sister of Susan Bailey, who married Harry’s brother Frederick.

The couple have five children.  Lily is 7, Nellie (Helena Matilda) is 5, Olive Grace is 3 and Fred (Frederick James Harvey) is 1. The eldest daughter, Ivy May, is 8 years old and living with Aunt Susan on Pearce Lane, Fulbourn, at the time of the 1911 Census.

The family also have a boarder living with them.  Dudley Solly is 24 and a brewer’s secretary from Sandwich in Kent.

Records for Cherry Hinton Infants School show that Ivy was a pupil there from the 14th of September 1908 (the last school she attended was Sturton Street) until she moved into the Upper School on the 1st May 1909.  Her address at that time is Esperanto Terrace.

Ivy left the Upper School on the 18th February 1910 and the reason was given was “left village”.  This is probable when the family returnes to Sturton Street.

When Harry enlists during World War 1 he gives his address as 6a York Terrace (the current number 12), so the family will leave number 93 by 1916.