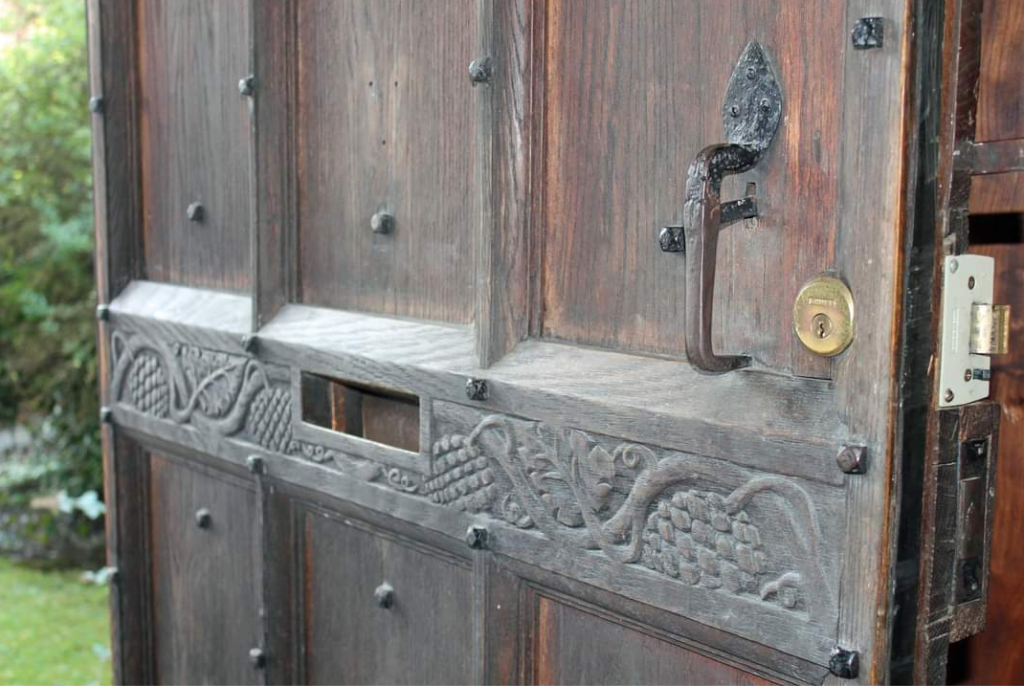 Front door design by Mackey Hugh Baillie Scott in 1912/13 for Herbert Ainslie Roberts of Gonville and Caius College and secretary of the University Appointments Board.

Garden and House is a Listed Building

The garden of 48 Storey’s Way, laid out in 1913 to the designs of M. H. Baillie Scott, is included on the Register of Parks and Gardens of Special Historic Interest at Grade II for the following principal reasons:

* Designer: it is by one of the most accomplished and prolific designers of the Arts and Crafts Movement whose work is well represented on the List;

* Design interest: it is a highly significant work that embodies Baillie Scott’s fundamental ideas about garden design and a unified approach to planning. The design of the garden is carefully integrated with that of the house to create an open and dynamic relationship between the inside and outside space, and demonstrates the serious thought he gave to small, everyday gardens that involved a realistic amount of maintenance for their owners;

* Intactness: the layout has remained in almost its complete original state and retains nearly all the features seen in early photographs;

* Rarity: it is not only a rare and important survival of a suburban Arts and Crafts garden but is the only known example of a garden of this scale by Baillie Scott to have survived in anything like its original condition;

* Group value: the garden and house form an ensemble of exceptional importance as one of the best examples of Baillie Scott’s seminal and influential work. The garden has considerable group value with the house which is listed at Grade II* and is part of an important cluster of five listed Baillie Scott houses in Storey’s Way;

* Context: the garden forms part of an exceptional suburban development in West Cambridge which encompasses the work of some of the most notable architects of the day.