1500: lease granted by Barnwell priory to John Hedynglay, brewer and burgess of Cambridge

c.1545. Probably at about the same time as he acquired the lease of Tassell’s garden, Miles Prance had bought the plot at (2) and c.1548 bought the four old chantry cottages nearby and set about building the inn that became the Half Moon on plot (1). This was completed in 1552. Prance was probably already in possession of old 32 Bridge Street. The date of the beam of the entrance yard was 1552.

1580: Miles Prance died and left the Half Moon to his son John.

1604: John Prance leased to Thomas Whiteside, a capital messauge ‘ containing in the dwelling house 3 nether rooms with a buttery leaning to the kitchen and fyve sollars all tiled.’

1663-5: leased to John Allen, waterman. John was the son of Richard Allen I who ran several inns in Cambridge circa 1660. 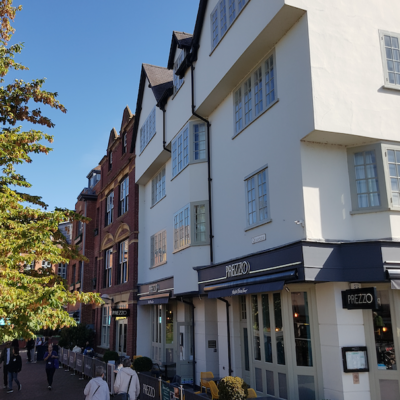