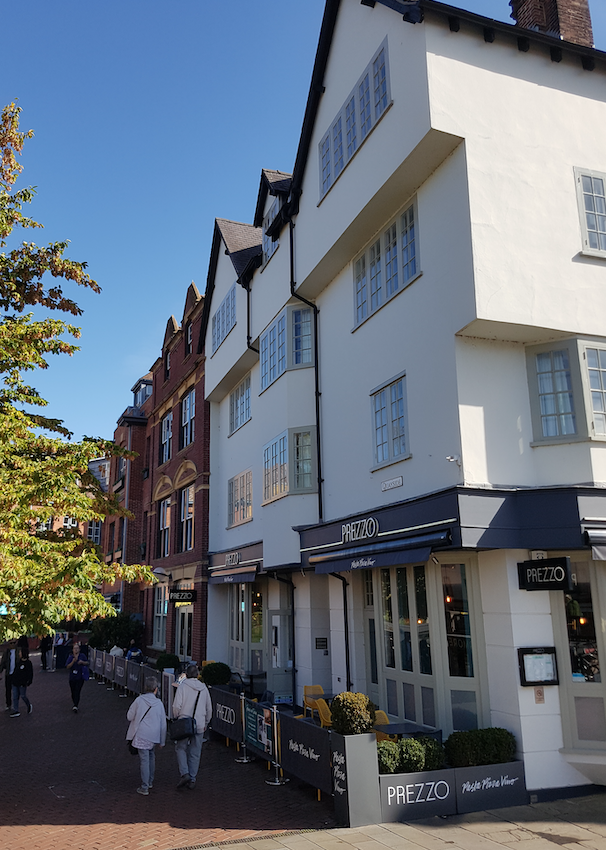 Also note that until the mid 18th century there was an Anchor Inn on the site of 31 Bridge Street above, contemporaneous with The Black Boy.

Circa 14th/15th cent there was a west facing house on plot (2) but no houses on (3) and (4). At (3) and (4) there was a yard associated with (2) and by 1573 at least one warehouse in the yard. Previously in the 16th cent. the yard had been used for cooperage and/or brewing, initially by John Ford of St Clement’s who died in 1521. John Ford left the property to his wife Eleynn for her life and then to his son Thomas. The widowed Mrs Ford married Thomas Bell [perhaps the son of Thomas Bell who rented Sedge Hall from Corpus in 1486 and Alice who rented a garden from St John’s in 1490] but her second husband died 6 months after the marriage. Ten years later Eleyne died and left her son Thomas ‘my brewhouse in which William Browne is now dwelling. The following year Thomas Ford died leaving the brewhouse to his wife Alis. (All three Fords asked to be buried in the chapel of St Nicholas in St Clement’s Church, a chapel which was described as new in 1521.)

Within a year or so of William Browne’s death the three properties mentioned in his will were in the possession of Miles Prance. (He may have married the widow Katherine Browne.) He probably lived at (2) but c.1548 bought the old chantry houses nearby and set about building the inn which became the Half Moon. Nos 2 and 2a Quayside were combined to form a single house or inn which contained ‘8 several rooms tyled’ in 1611. (see entry on Half Moon)

1595: John Prance granted John Coventry a new lease covering (2/2a), the Half Moon and cottages in Harleston Lane, for a rent of £22.

1605: John Coventry buried in St Clements. Coventry family stayed at (2/2a) but a relation by marriage, Thomas Whiteseeded came to take over the Half Moon.

1627: by this year the daughters had probably sold the property, possibly to Edward Anger, gent. In 1627 the tenant was John Coventry’s nephew, Nicholas Coventry, merchant. Nicholas may have lived at (2/2a) from his birth in 1590 until he acquired the lease of the Half Moon some years before 1635.  He then divided (2/2a)  into two alehouses; (2) became the Black Boy, taking its name from another inn on the other side of the river which had disappeared; (2a) next to it became the Cock and Pie.

1634: Alderman John Badcock acquired the freehold of the property (2/2a) from Edward Anger and when he died in 1634 it was left to his wife, Ann. Ann then sold the property (2) to her brother in law Christopher Rayleton who was living in it already. (2a) was bought by John Hills and in 1638 given to his daughter Judith on her marriage to Nicholas Tabor I, merchant.

1647-52: Robert Gunnell, bricklayer; in 1652 he had ‘demeaned himself a paynful honest man [and] kept a tippling house for five years past.’

1672: in two wills there is reference to ‘the corner house, now the River House, and now knowne by the signe of the Black Boy‘. In 1859 there is a reference to a Public House, formerly the Black Boy and since the Anchor. (T E Faber p.147)

1697: the Cock and Pie (2a) was mortgaged under that name by Nicholas Tabor II for about £100. the lender, Gamaliel of London, sold his interest in the loan to someone else in 1698. In that year the Cock and Pie was occupied by Mary Warner, widow of Thomas warner.  Shortly after 1697 Nicholas Tabor II sold all his holdings in St Clement’s and moved away. The property seems to have been bought by Alderman Thomas Jermin, from whom it descended to Mary, ‘daughter and heir to the body of Thomas Jermin’ and wife of Howland Nutting.

1754: the Nuttings sold (2a) to James Wendy Jr of Barkway, butcher: it was then a ‘tenement heretofore in the occupation of Mary Warner widow and now …. between the Half Moon and a messuage or tenement now or late called the Anchor near the Great Bridge’.

1822: Richard Foster, owner of Thompson’s Lane Brewery, bought (2a) in 1822 from a successor of James Wendy’s widow. he already had ownership of (2). So, when the Foster estate went up for auction in 1859 the two properties were offered as a single lot.

1861: by this year the Anchor, Jolly Waterman and Union Tavern had all ceased trading. This would have been because of the collapse of river trade at the coming of the railway. In 1859 the properties together fetched only £236 and were bought by Benjamin Jolley. By the end of the century he had established his sons as furniture dealers ‘Benjamin Jolley and Sons’ with extensive warehouse space in the area.

1893: Although the Jolley family owned much of this area by this year, another building had been built on the site of (2) and (2a) Quayside owned by John and Henry Eaden. It also covered the site of No. 3 Quayside and part of No. 4 but became known as no. 32 Bridge Street. The Eadens also owned no. 31 Bridge Street and Magdalene College bought both buildings in 1904.