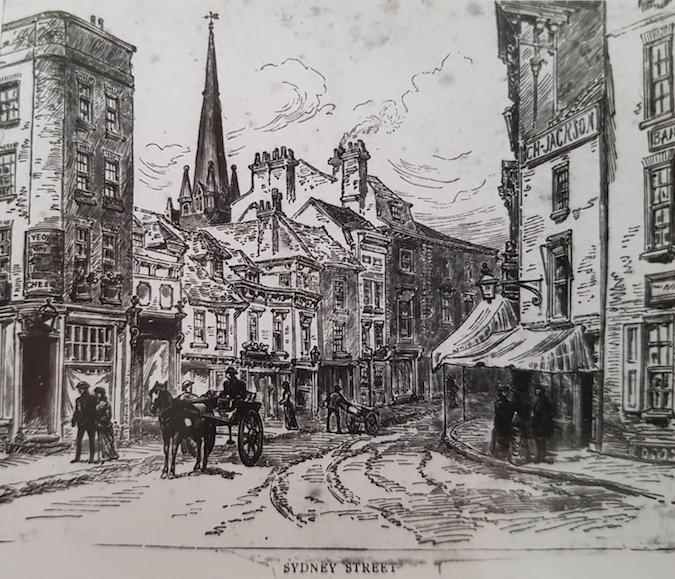 The drawing seems to show a view looking north from the beginning of Sidney Street with the spire of Holy Trinity church in the background. 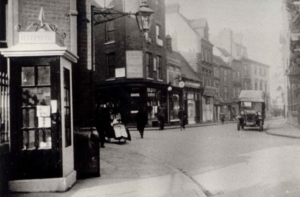 Telephone Kiosks – Cambridgeshire Scrapbook May 12th 1920
Cambridge Borough Council will tomorrow be asked to approve of the erection of telephone kiosks under the shelter at Hyde Park Corner, and near Sidgwick Avenue (or the side of Queens’ Road). Suggested sites on the Newmarket Road (near Abbey Road) and on the public footpath on Mill Road (near Catharine Street) have failed to secure the approval of the Paving Committee, and in the former case the Borough Surveyor has been asked to select a suitable position in Sun Street, whilst in the latter the Post Office authorities have been requested to obtain another site on private property. 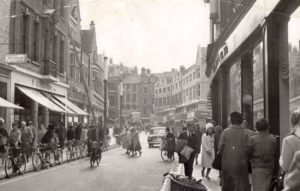 An author once remarked that Cambridge was unique for the manner in which its population parked their countless bicycles – “Cambridge wise” he called it, thereby implying that local inhabitants adopted an air of supreme nonchalance, when, with a careless flick of the foot, they balance their machines on the edge of the pavement, suspended on one pedal – and not much of that. Our reporter saw two cycle accidents within five minutes. In one case a cycle fell against a double-decker bus as it passed, and in the other, a machine toppled over when there was nothing near it. In both cases the cycles were damaged. In order to reduce kerb parking to a minimum, the council is endeavouring to provide all possible facilities for cycle parking clear off the highways