The Grand Arcade excavations revealed numerous old well sites. One of these Well 38, Plot XI, existed on this site in the late 16th century. The archaeological significance of this and the finds made are described on page 138 of the report (pub.2019). One of the pieces of wood has been shown to be from a tree in Greece that was cut down about 1565. It would have been from a cask used for shipping wine.

On page 257 the report notes that the house was described as a ‘well built residence’ in 1814 with a ‘handsome flight of steps and stone entrance.’ At the time there were three planting beds at the back but these went out of use by 1840-60. 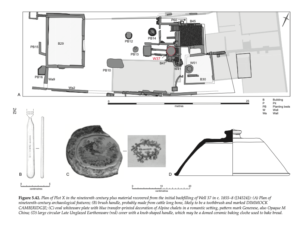 Archaeological remains found at the site may well date from 1855-8 when Elizabeth Newby moved to 18 Park Side and all her children had left Cambridge. the finds included dining related material and evidence of imported alcohol. A large amount of gardening equipment was also left behind.

The Grand Arcade excavation report (2019) contains the following  summary of the lives of the Newby family in the context of the archaeology (p411f):

Pottery linked to Barnett Leach III or IV was also found in an assemblage at Grand Arcade, which was linked primarily to the Newby family and deposited c. 1840–60. As the Newby family only moved to Cambridge c. 1820 there is no possibility of any direct interaction between them and Barnett Leach III or IV. The material in this later assemblage attests primarily to the adults William and Elizabeth Newby; despite them having three daughters and a son there is no material that can be unambiguously linked to their children. The temptation is therefore to see the deposition of this assemblage and the ‘death’ of the artefacts in terms of the literal death of William Newby (c. 1798–1852) or the metaphor- ical death of the household when Elizabeth Newby (c. 1812–76) moved away (c. 1852–8). It is, however, possible to conceptualize the ‘death’ of the artefacts as merely an early stage in the life of the Newby children. Their son William John Newby (1836–1933) left England in 1860 to serve as a lieutenant and later captain with a group of British volunteers in the Risorgimento or Italian war of unification. He subsequently returned briefly to Britain, presumably spending at least some time in Cambridge with his mother, before departing for New Zealand in 1865. In New Zealand he fought in the Second Taranaki War against the native Māori population (1864–7), took part unsuccessfully in the gold rush to the Thames goldfields, was a farmer in the Tapu district and then moved to Auckland in 1907 where he lived until his death, by which time he had 10 surviving children, 33 grandchildren and 14 great-grandchildren, some of whom are still alive today.

In terms of materiality there is no evidence that William John Newby retained any items from his childhood in Cambridge. When he left for New Zealand in 1865 he took with him a hat box, a pair of skates and a box of cricket gear, with his bats and wicket keeping pads. Later his ‘greatest treasures’ are described as being a photograph of Garibaldi, the badges of the Italian campaign, a letter from the officers and men he served with and an ‘interesting relic’, the ‘sword he carried in the Italian campaign’. He also received telegrams on his 100th birthday from the King and Queen, as well as Mussolini, and was presented with a pipe plus tobacco and an engraved pewter pot or silver cup (the sources vary) by the Auckland Working Mens Club. The cricket gear that William JohnNewby took to New Zealand is, in a sense, a form of a link to Cambridge, as he must have learnt the game as a boy and played a single match of cricket for Cambridge Town Club in 1858–9. His otherlinks to Cambridge were less tangible, including ‘vivid memories of sporting affairs at Cambridge University and [he] has looked forward each year to the Oxford-Cambridge boat race. Photographs of winning Cambridge crews adorn his walls, and news of a victory by his University has alwaysbeen a source of great delight to him’. Additionally William could ‘remember the houses in the streets of that time [i.e. his childhood] and in many cases the names of residents and shopkeepers’.

Barnett Leach III and IV and William John Newby are at most peripheral players in the archaeological Grand Arcade narrative(s). In terms of a fully fledged global historical archaeology individuals will be linked to multiple locations duringtheir lifetime. Whilst their documented and archaeological connections to some sites may be strong, it would be a methodological weakness to focus exclusively on these and ignore the multi-sited nature of past individual realities. The obvious risk with pursuing such weak linkages is the issue ofwhen connections become so diffuse that they are effectively meaningless. New Zealand has featured in anecdotes and metaphors used in other Cambridge Archaeological unit publications concerned with the Iron Age and Romano-British fenland sites (Evans 2003, 250: Evans, 2013, 479–81). The archaeological connection between Grand Arcade and New Zealand is more direct – temporally at least – that these other examples, but it remains to be seen if it is truly more meaningful, given that it exists only because of documentary sources and is not inherent in anything that was excavated.

Elizabeth Prior, 60, independent, b Hunts

James W Prior, 38, solicitor, b Cambridge

The house was rebuilt 1867-69, notably a grand Romanesque-style doorway to the side passage. In each spandrel above the arch  there is a recessed roundel containing an ornate ‘WM’. These can be linked to William  Mayland a photographer who lived here c.1864-69. The property was described as having a photographic studio in 1869. This was a building behind the house and the studio continued to be used by Robert Farren and members of his family such as Amy. By 1881 this building at the back had been converted into a school. 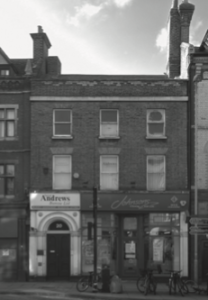