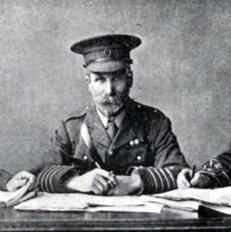 Royal Commission Survey of Cambridge 1959: the site was advertised to let on building leases for a term of forty years in the Cambridge Chronicle for 30 Nov. 1850, plans and elevations being prescribed; application was to be made to Elliot Smith. In St Peter’s Terrace the revived Roman and the contemporary styles are combined with virtuosity and much logic in a street-front of architectural distinction.

Isabel Margaret Finch, 24, b Hampstead.  Her parents are away from home on the night of the census.  Her father, Gerard Brown Finch, is a Barrister.

Kathleen Parkinson, 17, Kitchen Maid, b Cambridge.  Her parents live at 5 Gifford Place, her father is a cellarman.

Joseph Griffiths (1863-1945) appointed pathologist to Addenbrookes Hospital. During WWI Griffiths commanded the 1st Eastern General Hospital in Cambridge with the rank of colonel, RAMC. He is considered to have personally built up the hospital organisation in readiness for war and introduced a regime of open air wards with excellent results. He created a museum of pathology in Cambridge.

E M Keynes said in A House By The River: I am told that he had an almost fanatical belief in the curative value of direct sunlight … the Hospital [1stEGH] remained open-sided for nearly two years.